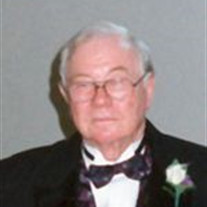 Aaron Hearnen, age 92, of Burnsville, formerly of Marshall, passed away on Tuesday, July 8, 2008 at The Lodge on Summit Oaks Hospice House in Burnsville. Funeral Services are scheduled for 10:00 AM on Saturday, July 12, 2008 at Holy Redeemer Catholic Church in Marshall. Visitation will be held from 5 to 8 PM with a 7:30 PM prayer service on Friday, July 11, at the Hamilton Funeral Home in Marshall. Visitation will continue one hour prior to the service on Saturday, at the church. Burial will be in the Calvary Catholic Cemetery. Online condolences available at the www.hamiltonfh.com Aaron Martin Hearnen was born on December 20, 1915, in Canby, Minnesota, to Coleman and Marie (Choan) Hearnen. He attended and gradated from Canby High School. He then went on to farm near Canby. On April 25, 1942 Aaron was united in marriage to Elaine Delores Halvorson at St. Peters Catholic Church in Canby. To this union, 11 children were born. They farmed near Canby until 1960 when they moved to Marshall. Aaron then worked as a driver for Swift and Co. He retired in 1980 at age 65. He enjoyed watching the horse races at Canterbury Downs and spending time with family and friends. Aaron passed away at the age of 92 years, 6 months, and 19 days. He is survived by 9 children, Susan (and Wayne) Lindberg of Ironton, Mary Carey of Burnsville, Katherine Knutson of Turtle Lake, WI, Karen Hearnen (and Juan Rivera) of Burnsville, Timothy Hearnen of Marshall, Joan (and Steve) McCombs of Minneapolis, Ann Hearnen (and Duane Borgan) of Burnsville, Laurie Koenig of Rice Lake, WI, and Robert Hearnen of Burnsville; 11 grandchildren, Kevin (and Sharon) Lindberg, Mark (and Chris) Lindberg, Lisa (and Scott) Sicora, Stacy Carey, Jason Carey, Cara (and Jason) Klatt, Tricia Knutson, Stephanie (and Mike) Norris, Michaela Hearnen, MacKenzie Hearnen, and Jenna Koenig; 12 great grandchildren; two sisters, Carol Sigler of Boise, ID, and Delores Schelitzche of Hopkins; and many nieces and nephews; many other relatives and friends. Aaron was preceded in death be his wife, Elaine; parents, Coleman and Marie; sons, Michael and Steven; son-in-law, Greg Carey; and sisters, Mildred and Leila. Blessed be the memory of Aaron Hearnen.

Aaron Hearnen, age 92, of Burnsville, formerly of Marshall, passed away on Tuesday, July 8, 2008 at The Lodge on Summit Oaks Hospice House in Burnsville. Funeral Services are scheduled for 10:00 AM on Saturday, July 12, 2008 at Holy Redeemer... View Obituary & Service Information

The family of Aaron Martin Hearnen created this Life Tributes page to make it easy to share your memories.

Send flowers to the Hearnen family.