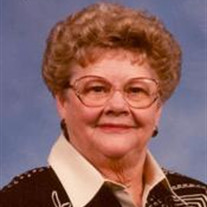 Russell Adeline “Sadie” Burckhardt, age 86, of Russell, passed away Saturday, May 28, 2011at the Colonial Manor Care Center in Balaton. Funeral services will be 2:00 P.M. Thursday, June 2nd at the First Grace Parish in Russell. Burial will be in the Russell City Cemetery. Visitation will be 4:00 P.M. to 8:00 P.M. Wednesday with a 7:30 P.M. prayer service at the Hamilton Funeral Home. Visitation will continue at the church on Thursday, one hour prior to the service. Adeline “Sadie” Faye was born on June 15, 1924 to Courtney and Edna (Turner) Morgan in Custer Township, Lyon County, Minnesota. She was baptized into the Presbyterian faith at her grandmother’s home. She was in the Tracy High School graduating class of 1942. Following graduation, Sadie moved to San Diego, California where she worked as a civilian at a U.S. Naval Base until 1946. She moved back to the Russell community and was united in marriage to Alvin Burckhardt in Sioux Falls, SD. She worked at various jobs which included Schwans, BH Electronics, Shorty’s Grocery Store, Russell High School and was a homemaker. She joined the Russell Presbyterian Church (Grace First Parish) in 1950 where she taught Sunday School and was active in the Youth Fellowship. She also was a Den Mother and member of the Russell American Legion Auxiliary. The love of her live was her family (especially her grandchildren) and other enjoyments were reading and being with friends. Sadie passed away at the Colonial Manor on Saturday, May 28, 2011. She had reached the age of 86 years, 11 months and 13 days. She is survived by her four children, Bruce (and Deb) Burckhardt of Brookings, SD, Keith (and Diane) Burckhardt of Russell, Mary Jo (and Doug) Zimmer of Marshall and Julie Burckhardt of Russell; nine grandchildren, Lance Burckhardt, Stephanie (and Jamie) Jensen, Adam ( and Jill) Biggar, Brandon Biggar, Jon (and Jeni) Burckhardt, Chadd (and Melissa) Burckhardt, Reed Burckhardt, Chelsey Zimmer and Tory Zimmer; six great grandchildren; a sister, Donna Ruppert of Slayton; also many other relatives and friends. She was preceded in death by her parents; husband, Alvin and a brother-in-law, Harlan Ruppert. Blessed Be The Memory Of Adeline “Sadie” Burckhardt

The family of Adeline "Sadie" Burckhardt created this Life Tributes page to make it easy to share your memories.

Send flowers to the Burckhardt family.