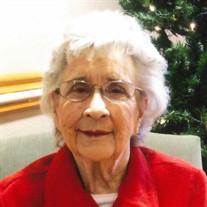 Adelyne “Boots” Wild, age 95, of Marshall, Minnesota, died on Friday, January 25, 2019, at Morningside Heights Care Center in Marshall. Celebration Of Life will be at 11:00 a.m. Friday, February 1, 2019, at Christ United Presbyterian Church in Marshall. Interment will follow at the Marshall Cemetery. Visitation will be held from 9:30 – 11:00 a.m. Friday, February 1, 2019, prior to the service at the church. Adelyne Ruth “Boots” (Harrenga) Wild, was born September 29, 1923, to Edward and Katie (Greenfield) Harrenga in Hamlin County, South Dakota on a farm. Her nickname was “Boots” as she always put her dad’s boots on after he took them off at night. Boots attended school and graduated from Estelline, South Dakota and worked her way through one year of commercial college in Watertown, South Dakota. She moved to Marshall to work for Weiner Bros, breaking eggs during the war. Adelyne then met Floyd and they were married on February 23, 1943, choosing that date as it was both of their parents wedding anniversaries. Boots and Floyd didn’t have a honeymoon. Instead, they had to take a load of cattle to south St. Paul. They were married just short of 60 years when her beloved Floyd died of a massive heart attack. To this union 4 children were born, Judy, Dennis, Lenny, and a baby dying just after birth. Boots now has 7 grandchildren and 7 great grandchildren, who are the pride and joy of her life. She had 4 sisters and 3 brothers who all preceded her in death. Boots was a longtime member, since January 1944, of the Presbyterian church, singing in the choir for 51 years, taught Sunday school and was secretary, treasurer, and co-chairman of Elizabeth Circle. Her favorite sport was bowling where she earned more than 75 trophies and topped everyone in Marshall Lanes for high average for a few years. Boots also loved to sing, both in her church choir and in “Sweet Adeline’s”. She was an excellent bookkeeper for their business, Floyd Wild Trucking. Boots also helped Floyd load cattle and hogs, taking the loading chute for him and driving the semi home so he could get some sleep as he farmed too. Their lives were always busy, but they always had time for their children, grandchildren, and great grandchildren, their pride and joy! Adelyne is survived by her children, Judy Bradac of Rockton, IL, Dennis (Carol) Wild of Marshall, MN, and Lenny (Helen) Wild of Newton, KS; grandchildren, Audra (Brad) Simmering, Alanna (James) Wild, Adam (Tracey) Bradac, Rebecca Bradac (Joe Starks), Peter Wild, Benjamin (Savanna) Wild, and Dana Wild; great grandchildren, Maya, Leighton, and Bennett Simmering, Avery, Parker, and Kenton Wild, and Aubrey Bradac. Adelyne is preceded in death by her parents, Ed and Katie Harrenga; husband, Floyd Wild; and siblings, Myrtle Plaisier, John Harrenga, Ann Bjugard, Peter Harrenga, Harold Harrenga, Gretchen Conway.

The family of Adelyne "Boots" Wild created this Life Tributes page to make it easy to share your memories.

Send flowers to the Wild family.