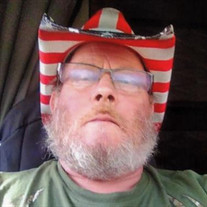 Alan Hubler, age 60, of Marshall, Minnesota, died unexpectedly on Thursday, February 18, 2021, while on the road in Springfield, Illinois. Funeral Services will be 2:00 p.m. Monday, March 1, 2021, at Living Word Lutheran Church in Marshall. Interment will follow in the Marshall Cemetery. A walk-through visitation will be held one hour prior to the service, from 1:00 – 2:00 p.m., on Monday, also at the church. Occupancy limits and social distancing must be observed throughout all services. Masks are required at all public indoor gatherings. Alan Keith Hubler was born to Harry and Lydia (Herman) Hubler in Syracuse, New York, on September 2, 1960. He was baptized and confirmed in the Methodist Church. Alan attended school in both Syracuse and Mexico, New York, and following High School he served briefly with the United State Navy. Alan was united in marriage to Cynthia McNally in Syracuse and the couple had 2 children, Sarah and James. Alan worked at various locations in New York as a cook. After 17 years with Cynthia, Alan then moved to Minnesota to be closer to his family. On October 13, 2001, Alan was married to Jennifer King in Lake Sarah Lutheran Church and the couple had a daughter, Cheyenne. The couple made their home in Garvin and Alan drove truck for McLain Northeast Trucking. In 2013, Alan moved into Marshall. Alan lived very much in a “go big or go home” way. He found peace traveling the country in his truck and his other enjoyments in life included fishing, cooking, and art projects – especially wax painting. He was very patriotic and loved to celebrate the Fourth of July by setting off spectacular fireworks shows. Alan Hubler died unexpectedly on Thursday, February 18, 2021, while on the road in Springfield, Illinois. He reached the age of 60 years, 5 months, and 16 days. Blessed be his memory. Alan is survived by wife, Jennifer Hubler of Marshall; son, James Hubler of Balaton; daughter, Cheyenne Hubler (Josh Jacobs) of Marshall; stepchildren, Danielle Martineau of Pipestone, Amy Hubler of Marshall, Brandon Dwire of Marshall; 4 grandchildren, Autumn Laschinki, Jayden Hubler, Jackson Bailey, Noah Jacobs; sisters, Carol (Duane) Wilking of Yankton, SD, Lori Bruns of Marshall, Pam Hubler of Syracuse, NY; nieces, nephews, other relatives, and friends. Alan was preceded in death by his parents, Harry and Lydia Hubler, and daughter, Sarah Hubler.

The family of Alan Keith Hubler created this Life Tributes page to make it easy to share your memories.

Send flowers to the Hubler family.