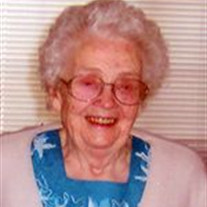 Alice Cutler, age 94, of Marshall, passed away at the Avera Morningside Heights Care Center on Saturday, February 28, 2009. Funeral services will be 11:00 A.M. Friday, March 6, 2009 at the First Lutheran Church in Marshall. Visitation will be held on Thursday evening, March 5, from 5 to 7 P.M. with a prayer service at 6:30 at the Hamilton Funeral Home. Burial will be in the Lynd City Cemetery following the lunch. Visitation will continue one hour prior to the service on Friday, at the church. Condolences may be submitted at www.hamiltonfh.com. Alice Bernice Erickson was born to Thomas and Matilda (Larson) Erickson on August 4, 1914 in Lynd, Minnesota. She was baptized and confirmed in the Christian faith. She attended Lynd Schools and graduated from Lynd High School. She would also go on to complete her bachelor’s degree in teaching at age 53. On November 15, 1936, Alice was united in marriage to Lyle Cutler at First English Lutheran Church in Marshall. She taught for many years, starting in District 85 near Balaton. Alice went on to teach in District 73 near Tracy, in Amiret, and Lynd. She joined Lyle in death on Saturday, February 28, 2009. She had reached the age of 94 years, 6 months and 24 days. Alice’s enjoyments in life were first and foremost teaching. She loved what she did and spent many extra hours with those who were slow to learn. She was a quietly compassionate person. She also loved the lake, beating Lyle at Rummy, her flower garden, and spending time with family and friends. She is survived by two daughters, Darcy (and Doug) Paxton of Ghent and Carol (and Jim) Lass of Minneapolis; son-in-law, Robert Wooldridge of Albuquerque, NM; seven grandchildren, Jim, Doug, Robin, Dawn, Jimmy Jr., Jeremy, and Robert Jr.; 12 great-grandchildren, Tabitha, Devon, Brandon, Tyler, Evan, Alyssa, Ashley, Jonathan, Selena, Rick, Benji, and Netanya; a great-great-granddaughter, Brooke Dianne; sister-in-law, Eleanor Griffith of Clarissa, MN; and many other relatives and friends. She was preceded in death by her parents; husband, Lyle; daughter, Dianne Wooldridge; brothers, Edgar Erickson and Melvin Erickson; and sister-in-law, Ruth Medrud. Blessed be the memory of Alice Cutler

The family of Alice Bernice Cutler created this Life Tributes page to make it easy to share your memories.

Alice Cutler, age 94, of Marshall, passed away at the Avera Morningside...

Send flowers to the Cutler family.