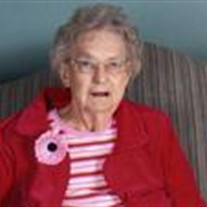 Marshall: Alice M. Serreyn, age 91, of Marshall, formerly of Lynd, passed away at the Avera Morningside Heights Care Center on Sunday, July 29, 2012. Funeral services will be 1:00 P.M. Friday, August 3rd at the Hamilton Funeral Home. Visitation will be one hour prior to the service. Burial will be in the Lynd City Cemetery. Alice Martha was born on April 23, 1921 in Ash Lake township, Lincoln, County, Minnesota to Martha (McCartney) and Leornard Menuey. She attended school at rural District 61. While growing up she worked with her mom and dad on the farm. Alice fell in love with Henry Serreyn and they were married on December 16, 1939 in Arco. They worked on various farms in the area until 1943 when they both worked on road construction. Alice was a flag lady. They moved to Lake Benton where they had a gas station and Alice worked for Fecker’s Produce in Pipestone for a few years. They moved to Lynd in 1968 where they raised dachshund and rat terrier puppies, and Alice worked at the Marshall Produce where she was an egg cracker. Henry passed away on November 16, 1997. Alice moved to Marshall in 2000. She broke her hip on April 7th and then entered the Morning side Heights Care Center on April 12, 2012. She passed away there on Sunday, July 29th. She had reached the age of 91 years, 3 months and 6 days. She is survived by three children, Larry (and Norma) Serreyn of Arlington, WA, Gene (and Bonnie) Serreyn of Portland, OR, and Sharlean (and Jack) Redllinger of Marshall; grandchildren, Matthew Serreyn, Timothy Greenwood, Karen Serreyn, Barb Serreyn , Chelsey Serreyn, Dillon Serreyn, Shannon Redlinger, Todd Redlinger; great grandchildren, Ryan Redlinger, Sean and Sabastan Redlinger, Gwendolyn, Henry and Jackson Serreyn, Katelynn Carlson, and Ben and Bridgette Clealy; sister, Carie Albee; also many relatives and friends. She was preceded in death by her parents; husband, Henry; and two sisters, Bernice and one in infancy. Blessed be the memory of Alice m. Serreyn

The family of Alice Martha Serreyn created this Life Tributes page to make it easy to share your memories.

Send flowers to the Serreyn family.