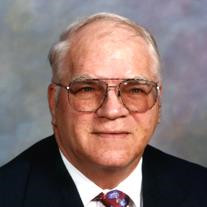 Louie Vlaminck, age 87, of Marshall, Minnesota, passed away on Saturday, June 3, 2017, at the Sanford Medical Center in Sioux Falls, South Dakota. Mass of Christian Burial is 11:00 a.m. Wednesday, June 7, 2017, at Holy Redeemer Catholic Church in Marshall. Following a reception for attendees, interment will be in St. Edward’s Catholic Cemetery in Minneota. Visitation is one hour prior to the service, from 10:00 – 11:00 a.m. on Wednesday, at the Church. Clergy Officiating: Rev. Father Paul Wolf Urn Bearers: Brandon Bormann, Adam Vlaminck, Tracey Vlaminck Alouis “Louie” Charles Vlaminck was born December 31, 1929, on the family Farm in rural Ivanhoe, Minnesota to Peter and Ida (Sinave) Vlaminck. He was baptized, received first communion, and was confirmed at Ss. Peter and Paul Catholic Church in Ivanhoe. Louie attended country school through the eighth grade before helping his folks on the farm. At the age of 18, Louie joined the United States Air Force and served his country as an airplane mechanic during the Korean War. He was honorably discharged in October of 1952 and returned to Minnesota where he met Ms. Elaine Hochstatter while going to a dance. Elaine and Louie were united in marriage on February 7, 1955, at St. Eloi Catholic Church in Ghent. The couple farmed Southwest of Minneota for a full 40 years. They retired in 1995 and moved to Marshall. When Louie needed more assistance with his daily care, he entered the Senior Haven Nursing Home in Canby, Minnesota, this March. Louie was a proud life-long farmer and a member of the Marshall VFW and long-time member of the Catholic Church. His other enjoyments in life included, fishing, 4-wheeling with the grandchildren, bingo, playing cards, and John Deere tractors. He was a Jack-of-all-trades and enjoyed tinkering as a mechanic in his free time. Alouis died June 3, 2017, in Sioux Falls, South Dakota, at the age of 87 years, 5 months, and 3 days. Blessed and eternal be his memory. Louie is survived by his wife of 62 years, Elaine Vlaminck; four children, Nancy (and Brian) Bormann of Canby, Barb (and Larry) Zondervan of Jenison, MI, Steve (and Jolene) Vlaminck of Harvey, ND, Paula (and Tom) Sterzinger of Taunton; 23 grandchildren; 16 great-grandchildren and 2 on the way; brothers, Lucien (and Jean) Vlaminck of Willmar, John (and Bea) Vlaminck of Grass Valley, CA; nieces, nephews, other relatives, and many friends. He is preceded in death by his parents, Peter and Ida Vlaminck; son, Greg Vlaminck; grandson, Zach Vlaminck; and siblings, Martha, Paul, Cyril, Gaston, Jerry, and Andrew.

The family of Alouis "Louie" Charles Vlaminck created this Life Tributes page to make it easy to share your memories.

Louie Vlaminck, age 87, of Marshall, Minnesota, passed away on...

Send flowers to the Vlaminck family.