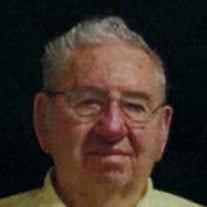 Marshall: Alvin C. Seiler, age 84, of Marshall, formerly of Russell, passed away at the Prairie Home Hospice House on Tuesday, September 20, 2011. Funeral services will be 10:30 A.M. Friday, September 23rd at the Albright United Methodist Church. Burial will be in the Marshall Cemetery. Visitation will be 4:00 P.M. to 8:00 P.M. with a 7:00 P.M. prayer service Thursday at the Hamilton Funeral Home. Visitation will continue at the church on Friday, one hour prior to the service. Alvin Carl Seiler was born on January 14, 1927 in Lynd Township, Lyon County, Minnesota to parents William A. and Agnes (Fischer) Seiler. He was baptized and confirmed in the Evangelical United Brethren Church in Marshall. He graduated from the Lynd High School in 1944. On May 26, 1951, Alvin was united in marriage to Donna Burckhardt at the Evangelical United Brethren Church. He served his country in the National Guard and Army from 1951 to 1952. They farmed near Russell and Arco areas and back to Russell for 37 years. He was a member of the Evangelical United Brethren Church, the Russell First Presbyterian Church (Grace First Parish) and moved to Marshall in 1996 he became a member of Albright United Methodist Church. He also was a former member of the Russell (Life Member) American Legion Post and now was a member of the Marshall American Legion Post. After retiring from active farming in 1978, Alvin drove school bus for Russell and Lynd, drove truck for Marshall Foods, Anderson Construction and Tyler Wholesale, and was custodian at Lynd School from 1983 to 1990. Alvin passed away at the Prairie Home Hospice House on Tuesday, September 20, 2011. He had reached the age of 84 years, 8 months and 6 days. He is survived by his wife, Donna of Marshall; four children, Colleen Wohlman of Sioux Falls, SD, Leland Seiler of Russell, Lorna Seiler of Oakdale, and Connie Seiler of Eagan; three grandchildren, Rebecca, Bobbie and Bradley; five great grandchildren; sister-in-law, Mona Buesing; also many nieces and nephews. He was preceded in death by his parents; sister, Helen Maronde; nephew, Paul Buesing; brother-in-laws, Marvin Maronde and Arnold Buesing Jr. Blessed Be His Memory

The family of Alvin C. Seiler created this Life Tributes page to make it easy to share your memories.

Send flowers to the Seiler family.