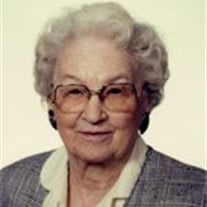 Amy Mildred Olsen, 100, died in Marshall at the Morningside Care Center, on Saturday, June 19, 2010. On Wednesday, June 23, a prayer service will be held in the Gethsemane Chapel of First Lutheran Church from 6:30 - 8 p.m. This will be a time for reflection and participation for all who gather with the family; there will be a short program at 7:15 p.m. A service to celebrate Mrs. Olsen’s life will be held at 2:00 p.m. at First Lutheran Church in Marshall on Thursday, June 24. Visitation will continue at the church one hour before the service. Amy Mildred Olsen was born on January 20, 1910 in Duluth, the daughter of Carl and Marie (Berggren) Dahl. Throughout her life Mrs. Olsen was active in her church at all levels from serving on boards to helping in the kitchen. She remained actively involved with First Lutheran Church in Marshall until she became ill in March of this year. Mrs. Olsen was a member and leader for more than 40 years of the Variety Study Club, a local chapter of the national General Federation of Women’s Study Clubs. When her daughters were young, she was active in the Girl Scouts. For several years during her youth, Mrs. Olsen was a competitive speed skater for the Duluth Girl Scouts and the Duluth Parks Department; she also played on a young women’s’ hockey team. In 1928 Mrs. Olsen graduated from high school in Virginia, Minnesota. Amy died in Marshall at the Morningside Care Center, on Saturday, June 19, 2010. She had reached the age of 100 years 4 months and 21 days. She is survived by her brother, Russell Dahl of Duluth; two sisters-in-law, Eda Dahl of Duluth and Wanda Dahl of Marshall; seven children, Dennis (Lodesta) Olsen, of Marshall; Willard (Helen) Olsen, of Piedmont, SD, Geraldine (Joseph) Rodrick, of Denver, CO, Priscilla (James) Russell, of Rochester, Judith (Richard) Anderson, of Eagan, Amy (Melvin) Verly, of Lakeville, and Nancy (Brian) Peltier, of Lynd; twenty grandchildren, forty-four great-grandchildren, eight great-great grandchildren; and many cousins, nieces and nephews. She was preceded in death by her husband, Stanley; an infant son, Stanley; her parents, ten brothers and sisters and one granddaughter. Mrs. Olsen was passionate about ice skating all her life, and skated every winter until she was 83 years old. On her 99th birthday, she was honored by the Marshall High School girls’ hockey team. During her life she knitted countless pairs of mittens and scarves for her children and a special sweater for each of her grandchildren. She traveled several times to Europe including a visit to the birthplace of her father in Norway where she spent time with her cousins who lived in the family home.

Amy Mildred Olsen, 100, died in Marshall at the Morningside Care Center, on Saturday, June 19, 2010. On Wednesday, June 23, a prayer service will be held in the Gethsemane Chapel of First Lutheran Church from 6:30 - 8 p.m. This will be a time... View Obituary & Service Information

The family of Amy Mildred Olsen created this Life Tributes page to make it easy to share your memories.

Amy Mildred Olsen, 100, died in Marshall at the Morningside Care...

Send flowers to the Olsen family.