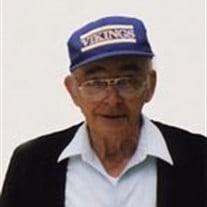 Andrew “Andy” E. Viaene, age 81, of Cottonwood, passed away at the Granite Falls Hospital on Sunday, November 4, 2007 after a short illness. Mass of Christian Burial will be 10:30 A.M. Wednesday, November 7, 2007, at St. Mary’s Catholic Church in Cottonwood. Burial will be in the church cemetery. Visitation will be 4:00 P.M. to 8:00 P.m. with a parish rosary at 4:00 P.M. and a 7:00 P.M. scripture prayer service Tuesday at the Hamilton Funeral Home. Visitation will continue at the church on Wednesday, one hour prior to the service. Military Honors will be presented by American Legion Post #503. Andrew was born in Ghent, Minnesota, to Cyril and Juliana (Vanesta) Viaene on September 8, 1926. He grew up and received education in Cottonwood. He was baptized, confirmed, and received first communion in the Catholic faith. After school Andy farmed until his service in the Navy. He served in World War II from 1945 until his honorable discharge in 1946. He then returned to farm by Cottonwood and later purchased a farm near Ivanhoe. Andy was united in marriage to Frances Burczek of February 4, 1947, at St. John’s Cantius Catholic Church in Wilno, Minnesota. They continued farming until he purchased and operated Andy’s Recreation for the next 44 years. He retired 6 years ago and has enjoyed spending time with his friends, family, and grandchildren. Other enjoyments in life were gardening, fishing, hunting, and playing pool. He was an avid card player and, in his younger days, he enjoyed playing softball. He served as a volunteer fireman for 20 years and was also a volunteer for the ambulance squad, which he helped start years ago. Andy passed away November 4, 2007. He had reached the age of 81 years, 1 month, and 26 days. He was a member of the St. Mary Catholic Church and the American Legion. He is survived by his wife, Frances; four sons, Ernie (and Joyce) of Cottonwood, Jim (and Rhonda) of Mankato, Ken (and Patty) of Willmar, and David (and Laura) of Willmar; one daughter, Mary (and Ken) Ochocki of New Hope; fourteen grandchildren; nine great-grandchildren; sister, Margaret Wittry of Marshall; and many nieces, nephews, and other relatives and friends. He was preceded in death by his parents; a sister, Marie Hoffman; and a brother, Albert. Blessed be the memory of Andy Viaene.

The family of Andrew "Andy" E. Viaene created this Life Tributes page to make it easy to share your memories.