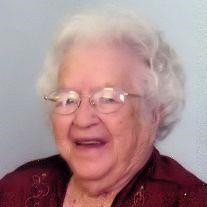 Anna Kor, age 97, of Balaton, Minnesota, passed away on Sunday, December 20, 2015, at Colonial Manor Care Center in Balaton, Minnesota. Funeral services are 11:00 AM Wednesday, December 23, 2015 at Grace First Parish in Russell. Interment will follow in the Lynd City Cemetery. Visitation will be held from 4:00 – 8:00 PM Tuesday, December 22, 2015, at the Hamilton Funeral Home in Marshall. A prayer service is set for 7:00 PM. Visitation will continue one hour prior to the service, from 10:00 - 11:00 AM, on Wednesday at the church. Clergy Officiating: Pastor Jeff Greathouse Organist: Beth Erdman Congregational Hymns: “What A Friend We Have In Jesus,” “Sweet Hour Of Prayer,” “Just As I Am” Soloist: Juliann Kor ~ “On Eagle’s Wings” Active Casket Bearers: James Kor, Janet Linde, John Kor, Joy Wilson, Michelle Forstner, Robin Baumgartner, Kay Johnson, Charles Kor, Juliann Kor, Spencer Kor Anna Venenga was born on July 15, 1918, in Rushmore, Minnesota. She was the daughter of John and Lena (Brosder) Venenga. Anna was baptized and confirmed at the Reformed Church in Little Rock, Iowa. She attended country school there through the eighth grade and then helped her parents on the family farm. She would eventually cross paths on the farm with a neighbor boy named Charles Kor. On February 6, 1940, Charles and Anna were united in marriage at the Reformed Church in Little Rock. The couple then moved to Minnesota and lived and farmed in the Russell, Arco, and Coon Creek Township areas. In addition to being a loving homemaker and farmwife, Anna helped raise their four children, Jans, John, Jennie, and Jim. The couple spent 50 years of marriage together before Charles died on November 3, 1990. Anna was a faithful member of Grace First Parish in Russell where she served with the Ladies’ Aid. Her enjoyments in life included traveling, eating out, gardening, watching the Vikings and Twins, and playing games such as Pinochle, Poker, and Checkers with her family. She especially cherished the time she spent with her 11 grandchildren, 17 great-grandchildren, and 4 great-great-grandchildren. Anna Kor entered her heavenly home on Sunday, December 20, 2015 at the age of 97 years, 5 months, and 5 days. Blessed be her memory. Anna is survived by her children, Jans (and Barb) Kor of Madison Lake, John (and Shirley) Kor of Forest Lake, Jennie (and Curt) Pope of Lynd, Jim (and Janet) Kor of Russell; 10 grandchildren, James Kor, Janet (and Curtis) Linde, John Kor, Joy (and David) Wilson, Michelle (and Richard) Forstner, Robin (and Kevin) Baumgartner, Kay (and Corey) Johnson, Charles Kor, Juliann Kor, Spencer Kor; 17 great-grandchildren; 4 great-great-grandchildren; nephews, nieces, other relatives and many friends. Anna is preceded in death by her parents, John and Lena Venenga; husband, Charles Kor; granddaughter, Julie Pope; and all 11 siblings. The family invites attendees to the church basement following the interment for a luncheon.

The family of Anna Kor created this Life Tributes page to make it easy to share your memories.