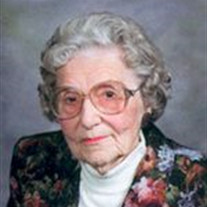 Marshall: Anne Mills, age 98, of Marshall, passed away on Wednesday, August 13, 2008, at the Avera Morningside Heights Care Center in Marshall. Funeral Services are planned for 2:00 PM on Wednesday, August 20, at Christ United Presbyterian Church. Visitation will be held one hour prior to the services, at the church. Burial will be in the Marshall Cemetery. Anna Mae Kramer was born on February 11, 1910, to Edwin and Margaret (Kitchin) Kramer in George, Iowa. She was baptized and confirmed in the Presbyterian faith. She graduated from Worthington High School in 1927 and from Normal School in 1928. She started teaching in one-room schools and taught for over 28 years until her retirement from Westside Elementary School in Marshall. She earned a teaching degree in 1963 from Mankato State University. Anne had been an active member at Christ United Presbyterian Church in Marshall since 1941, including serving as elder and deacon, coordinating the annual bazaar, and decorating bulletin boards. She had traveled extensively throughout the world since 1963. She also enjoyed spending time with family and friends. Anne passed away at the Morningside Heights Care Center on Wednesday, August 13, 2008. She had reached the age of 98 years, 6 months and 2 days. She is survived by three children, Marilyn Mills of St. Paul, Barbara Mills of Lawton, MI, and Mick (and Susan) Mills of Savage; four grandchildren, Erik (and Susan) Christenson, Ann (and Tom) Bjork, Michael Mills, and Mari Mills; sister, Evelyn Arens of Marshall; sister-in-law, Luella Kramer, Della Kramer, Gwen Kramer, and Doris Kramer; and also many nieces, nephews, other relatives and friends. She was preceded in death by her parents; brothers, Raymond, Walter, James, Alvin, and Morris; sisters, Marjorie Balster and Verna Gripentrog; and son-in-law, Kenneth Simon. Flowers are welcome, memorials preferred to Christ United Presbyterian Church in Marshall. Blessed Be The Memory of Anne Mills.

The family of Anne Mae Mills created this Life Tributes page to make it easy to share your memories.

Marshall: Anne Mills, age 98, of Marshall, passed away on Wednesday,...

Send flowers to the Mills family.