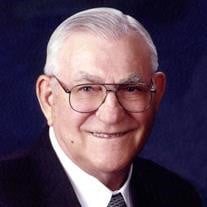 Anton “Tony” Skuya, age 92, of Marshall, Minnesota, died on Sunday, November 4, 2018, at the Prairie Home Hospice Lockwood House in Marshall. Funeral Services are 11:00 a.m., Saturday, November 10, 2018, at Cornerstone United Methodist Church in Marshall. Military Honors and a reception will follow at the church. Interment will be at a later date in the Marshall Cemetery. Visitation will be held one hour prior to the services, from 10:00 – 11:00 a.m., on Saturday at the church. Anton Skuya was born on February 17, 1926, in Lithuania. He was the son of Michael and Patricia (Skuya) Zebas. Tony moved to the United States with his family at age 3, settling in Sioux City, Iowa. He was baptized, received first communion, and was confirmed in the Catholic faith. Tony attended high school and then enlisted into the Marine Corps on September 16, 1943. A Corporal, he served as a tank driver and infantryman on Iwo Jima during World war II. He was honorably discharged on May 17, 1946, and then returned home. On April 4, 1953, Tony was united in marriage to Edna Wiltermood in Springfield, Illinois, and made their home in Creve Coeur, Illinois. The family moved around, from Baltimore, Maryland, to Huron, South Dakota, and then to the Marshall and Russell area. The couple shared over 65 years of marriage together and raised 3 children. Tony worked as a butcher at Marshall Meats and then as a janitor and maintenance man at the Lyon County Courthouse. He retired in 1990. He always teased his grandchildren, had a great sense of humor and enjoyed being the entertainer. Tony liked to BBQ, watch westerns, and cook his famous spaghetti. His other enjoyments in life included yard work, gardening, tropical fish, and family reunions. Anton Skuya died on Sunday, November 4, 2018, at the age of 92 years, 8 months, and 18 days. Blessed be his memory. He is survived by his wife, Edna; 3 children, Craig Skuya of Sioux Falls, South Dakota, Steve (Sue Borth) Skuya of Marshall, Paul (Bonnie Roberts) Skuya of Marshall; 6 grandchildren, Jeremy (Mandy) Skuya of Monticello, Jamie (Mike) Stuckey of Marshall, Joe (Haley) Skuya of Marshall, Matt (Brittany) Skuya of Marshall, Christin (Mike) Sneden of Sioux Falls, South Dakota, Ashley (Brad) Rydkema of Rosk Rapids, IA; 10 great-grandchildren, Taylor, Mason, Tannyr, Skya, Kyrie, Aubrey, MyKenzie, Mattea, Louis, Levi; nieces, nephew, other relatives, and friends. Tony is preceded in death by his parents, Mike and Patricia Skuya; brothers, Joe Skuya, John Skuya, Bill Skuya; sisters, Ann Yuzanes, Emma Valikonis-Dragan, Sophia White; and daughter-in-law, Vicki (Karbo) Skuya.

The family of Anton "Tony" Skuya created this Life Tributes page to make it easy to share your memories.

Send flowers to the Skuya family.