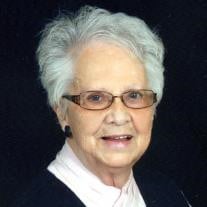 Ardis Sternke, age 92, of Marshall, Minnesota, died on Sunday, May 5, 2019, at Avera Morningside Heights Care Center in Marshall, Minnesota. Funeral Services are 11:00 a.m. Tuesday, May 14, 2019, at First Lutheran Church in Marshall, Minnesota. Interment will follow in the Marshall Cemetery. Visitation will be held from 5:00 – 8:00 p.m. Monday, May 13, 2019, at the Hamilton Funeral Home in Marshall. A Prayer Service is scheduled for 7:00 p.m. Visitation will continue one hour prior to the service, from 10:00 – 11:00 a.m., on Tuesday, at the church. Ardis Vivian Hall was born on September 23, 1926, to Adolph and Margaret (Boughton) Hall, on the family farm in Westerheim Township, Lyon County, Minnesota. She was baptized and confirmed at St. Lucas Lutheran Church in rural Cottonwood and attended country school through the 8th grade. Ardis then graduated from the Clarkfield High School with the class of 1945 and began working for the ASCS office in Marshall. On June 6, 1947, Ardis was united in marriage to Donald Frank Sternke at St. Lucas Lutheran Church. The couple owned and operated the Marshall Roller Rink. A few years later they bought the roller rink in Cokato, Minnesota. After several years there, they returned to Marshall and acquired the Wee Moderns Children’s Store which they operated from 1961 – 1973. Beginning in 1972, Ardis began working at Schwan’s as an office accountant and stayed there until she and Don both retired in 1980. The couple moved to Lake Miltona until 1985, when they returned to Marshall and then would spend winters in Mesa, Arizona. Ardis and Don shared over 61 years of marriage together before the love of her life died in January of 2009. Ardis was a proud member of First Lutheran Church and was active in the Shades of the Past Car Club. Ardis enjoyed visiting with family and friends, especially keeping up with their many nieces and nephews. Ardis Vivian Sternke entered her Heavenly home on May 5, 2019. She reached the age of 92 years, 7 months, and 12 days. Blessed be her memory. Ardis is survived by her siblings, Merlyn (and Sheryl) Hall of Tracy, Darlene (and Dale) Schroeder of Marshall, Corrine (and Don) Soyring of St. Cloud; sister-in-law, Betty Hall of Kansas City, MO; brother-in-law, Walter Sternke of Atlanta, GA; nieces, nephews, other relative and many friends. Preceding her in death were her parents, Adolph and Margaret Hall; husband, Don Sternke; and sisters, Carol Barron and Dianne Sternke; brother, Ordell Hall; and infant brother, Robert Wendall Hall.

The family of Ardis Vivian Sternke created this Life Tributes page to make it easy to share your memories.

Send flowers to the Sternke family.