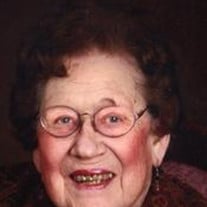 Lamberton: Ardith M. Pietz, age 90, of Marshall, formerly of Lamberton, passed away at the Sanford Tracy Hospital on Friday, February 18, 2011. A celebration of Ardith’s life will be 1:30 P.M. Saturday, February 26th at the Lamberton United Methodist Church. Burial will be in the Lamberton City Cemetery. Visitation will be 4:30 P.M. to 7:30 P.M. Friday at the Hamilton Funeral Home in Marshall. Visitation will continue at the church on Saturday, one hour prior to the service. Ardith Marie was born to Lawrence and Vernie (Silliman) Boaz on February 23, 1920 in Windom, Minnesota. She was baptized and confirmed at the Amo United Methodist Church near Storden. She attended a rural country school near her parents’ homestead and went on to graduate from Windom High School. On January 1, 1939, Ardith was united in marriage to Marvin A. Pietz at the parsonage in Jeffers, Minnesota. They lived in Rosehill Township from 1939 until they moved to rural Revere in 1941where they farmed with Marvin’s two brothers and their families. The loves of Ardith’s life were her husband, her family, and the home she and Marvin built together. In her younger years she kept a beautiful garden, knitted and crocheted, and she was an excellent cook. She loved to entertain and always set a beautiful table, whether for her family and friends or for her ladies circles and neighborhood groups. Ardith was a faithful member of the Lamberton United Methodist Church where she taught Sunday School for several years. Her husband Marvin passed away in May of 1998. In 1999 Ardith moved to Boulder Estates in Marshall where she thoroughly enjoyed all the activities and the company of fellow residents. Ardith joined Marvin in death on February 18, 2011 while at the Sanford Tracy Hospital. She had reached the age of 90 years, 11 months and 27 days. She is survived by her two daughters, Karen (and Roger) Torkelson of Coon Rapids and Marlys (and Richard Frisch)Haggerston of Marshall; three grandchildren and eight great grandchildren, Lori (and Rich) Ramhoff (Andrea and Reed) of La Quinta, CA, Brian (and Kelley) Torkelson (Joel, Angela and Mitchell) of Princeton, and Jamie Leonard (Kyle, Cora and Sadie) of Tracy. She was preceded in death by her parents; husband, Marvin; one brother, Robert Boaz; and two sisters, Thelma Clarke and Helen Holck.

Lamberton: Ardith M. Pietz, age 90, of Marshall, formerly of Lamberton, passed away at the Sanford Tracy Hospital on Friday, February 18, 2011. A celebration of Ardith&#8217;s life will be 1:30 P.M. Saturday, February 26th at the Lamberton United... View Obituary & Service Information

The family of Ardith Marie Pietz created this Life Tributes page to make it easy to share your memories.

Send flowers to the Pietz family.