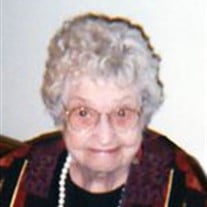 Arlene Carlson, age 92 of Balaton, formerly of Marshall, passed away on Thursday, April 24, 2008 the Colonial Manor Nursing Home in Balaton. Funeral Services are scheduled for 10:30 A.M. on Tuesday, April 29, 2008 at First Baptist Church in Marshall. Visitation will he held on Monday, April 28, from 4 to 8 P.M. with a prayer service at 7:00 P.M. at the Hamilton Funeral Home. Burial will be in the Lake Sarah Baptist Cemetery. Arlene Wanda Kepler was born on February 26, 1916 in Hamilton County, Iowa, to Jay and Zelma (McFarland) Kepler. She was baptized at the Evangelical Free Church in Stanhope, Iowa. On September 1, 1939, Arlene was united in marriage to Harold Carlson at the Evangelical Free Church in Slayton, Minnesota. They farmed in Lake Sarah Township and then lived in Slayton before moving to Marshall in 1965. Arlene worked at the Campbell Company in Worthington and in housekeeping for the Louis Weiner Memorial Care Center before retiring in 1972. Arlene passed away at the Colonial Manor Nursing Home in Balaton on Thursday, April 24, 2008. She reached the age if 92 years and 1 month and 30 days. Arlene was a faithful member of the First Baptist Church of Marshall. Her enjoyments in life included spending time at the lake, watching the birds from her window, Wheel Of Fortune on TV, and making banana bread for everyone to enjoy. She loved to be with and spend much time with family. She is survived by 8 children, Lowell (and Anita) Carlson of Worthington, Sharon Trigg of Wyoming, Carol (and Wayne) VanLerberghe of Marshall, Marilyn (and Jerry) King of Staples, Jeanine (and Doug) Robbins of Marshall, Diane (and Keith) Deblieck of Marshall, Linda (and Gary) Bednerek of Amiret and Ron (and Julie) Carlson of Sioux Falls, SD; 25 grandchildren; 32 great-grandchildren and 2 step-great-grandchildren; a sister-in-law, Francis Kepler of Slayton; and many other relatives and friends. She was preceded in death by her parents; husband, Harold; infant daughter; 3 sisters, Vella Carlson, Ferry Ziemke, and Leila Ziemke; 3 brothers, Leo Kepler, Keith Kepler, and Carvel Kepler; son-in-law, Donald Trigg; and great-grandson, Lyden Bednarek. Blessed be the memory of Arlene Carlson.

The family of Arlene Wanda Carlson created this Life Tributes page to make it easy to share your memories.

Send flowers to the Carlson family.