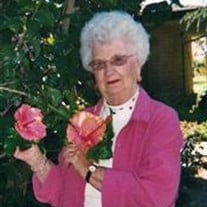 Arline Drager passed away October 4, 2011 at Oak Terrace Senior Living apartments in Mankato, MN. Visitation and services commemorating her life will be held beginning Saturday, October 8 at Hamilton Funeral Home, Marshall, MN. Visitation will begin at 9am, service following at 10am. Interment will follow at the Lynd City Cemetery. Arline Eleanor (Miller) Drager was born July 28, 1918 in Niagara, North Dakota to Charles and Minnie (Apfel) Miller. She was baptized and confirmed in the Methodist Church of Marshall, Minnesota. Arline was united in marriage to Lawrence Drager on September 17, 1940 in Tracy, Minnesota. After marriage, they moved to California until Lawrence entered the Army Air Corps in 1943. She accompanied her husband to various stations and packed parachutes as a civilian worker at the Air Base in Mountain Home, Idaho. Lawrence and Arline began farming in the Marshall area after his discharge from the Army Air Corps in 1946. Arline was active in the Weiner Memorial Hospital Auxiliary. And, she was an officer in the Eastern Star-Lona Chapter#12 for many years. Arline loved kids and was a long-time employee of 18 years at the Marshall Middle School. Whenever it was feasible, Arline loved to travel and many trips were enjoyed to California, Florida and Hawaii, Caribbean Cruise, and Spain. Golfing and dancing were also activities enjoyed together by Arline and Lawrence. Arline was very good with her hands expertly sewing, crocheting and doing embroidery throughout much of her life. Arline was a great fan of baseball particularly the teams of her grandsons and the MN Twins. Arline was also a faithful member of the First Lutheran Church in Marshall. She is survived by one son, Randy Drager (Jodi Jones), of North Mankato, MN and one daughter, Sherry Drager (Rick Raschke) of Savage, MN, three grandsons: Jeremy Drager of Colorado Springs, CO, Jesse Drager of Marshall, MN and Ian Drager of Mankato, MN; three sisters: Marge Friend, Minneapolis, MN, Marion (Bob) Burrell of Descanso, CA, and Toddy Krebsbach, San Diego, CA and many other relatives and friends. Arline is preceded in death by her husband Lawrence, her parents, three sisters, Jeanett Swanson, Hazel Weidaur and Violet (Bubbie) Carlson; three brothers, Melvin, Howard (Butch), Wilbur (Bud) Miller; one son Larry Drager; two sons in infancy, William and Wayne Drager; and one grandson, Justin Drager. Blessed be her memory.

The family of Arline Drager created this Life Tributes page to make it easy to share your memories.

Send flowers to the Drager family.