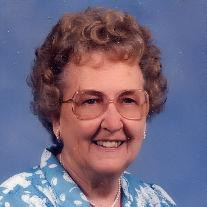 Arloene Margaret Olson, age 95, of Faribault and formerly of Russell, Minnesota, passed away on Friday, February 12, 2016, at the Brookdale Senior Living in Faribault, Minnesota. Funeral Services are 11:00 AM Tuesday, February 16, 2016, at Grace First Parish in Russell. Following a reception, interment will be in the Custer Cemetery, rural Garvin. Visitation will be held from 5:00 – 7:00 PM Monday, February 15, 2016, at the Hamilton Funeral Home in Marshall. A prayer service is scheduled for 6:30 PM. Visitation will continue one hour prior to the service, from 10:00 - 11:00 AM, on Tuesday at the church. Clergy Officiating: Rev. Bruce Drackley and Rev. Jeff Greathouse Organist: Beth Erdman Congregational Hymns: “Amazing Grace,” “Old Rugged Cross,” “Rock Of Ages” Duet: Diane Gravley & Jeanine Swift ~ “In The Garden” Active Casketbearers: Verlin Ritchie, Brock Dressen, Chad Lehnhoff, Kurtis Lehnhoff, Mick Williams, Jason Hedensten Honorary Casketbearers: Rueben and Judy Wee, Roger and Linda Sandness, Mona Buesing, Edna Skuya Arloene Margaret Robinson was born on July 24, 1920, on the farm in rural Garvin, Minnesota. She was the only child born to Earl and Maggie (Peterson) Robinson. Arloene was baptized as an infant and confirmed in her youth in the Presbyterian faith. She attended Tracy Public School and then Lamberton Teachers Training. She went on to Mankato State College and then taught country school. On September 23, 1944, Arloene was united in marriage to Walter John Olson at Arloene’s family homestead near Garvin. The couple made their home and farmed Southwest of Russell and were blessed with 2 children, Larry and David (who died in infancy). In 1963, Lawrence Lehnhoff joined the family. Arloene and Walter moved into Russell in 1978 and briefly lived in Marshall before going to Faribault in 2009 to be closer to family. The couple was blessed with over 66 years of marriage together before Walter died almost exactly 5 years ago. In addition to being a loving homemaker and farm wife, Arloene was a licensed genealogist, helping out many area churches and families in discovering their past. She had a big part in the Russell Centennial and made a lot of friends at the SMSU history center. She was member of Grace First Parish, where she taught Sunday School, and Vacation Bible School. She was also a member of the Order Of The Eastern Star for over 30 years. Arloene was honored to be named the 1990 Lyon County Outstanding Senior Citizen and runner-up at state. Her other enjoyments in life included playing piano, taking trips all over the country in the motorhome, crossword puzzles, her cats, and her granddaughters. Arloene Olson passed away peacefully on Friday, February 12, 2016 at the age of 95 years, 6 months, and 19 days. Blessed be her memory. She is survived by her son, Larry (and Dee) Olson of Faribault, Lawrence (and Sue) Lehnhoff of Perry, Iowa; two granddaughters, Amy Schak of Faribault and Sara (and Brock) Dressen of Faribault; 7 great-granddaughters, Courtney Schak, Allison Schak, Logan Schak, Caitlyn Dressen, Jacey Dressen, Avery Dressen, Madigan Dressen; nephews, nieces, other relatives and friends. Arloene is preceded in death by her parents, Earl and Maggie Robinson; husband, Walter Olson; and infant son, David. The family invites attendees to the church basement for a luncheon following the service.

Arloene Margaret Olson, age 95, of Faribault and formerly of Russell, Minnesota, passed away on Friday, February 12, 2016, at the Brookdale Senior Living in Faribault, Minnesota. Funeral Services are 11:00 AM Tuesday, February 16, 2016, at... View Obituary & Service Information

The family of Arloene Margaret Olson created this Life Tributes page to make it easy to share your memories.

Arloene Margaret Olson, age 95, of Faribault and formerly of...

Send flowers to the Olson family.