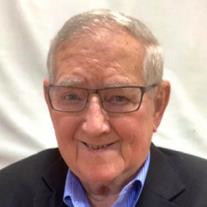 Arnold Zimmerman, age 85, of Ghent, Minnesota, died on Monday, February 11, 2019, at Avera Morningside Heights Care Center in Marshall, Minnesota. Funeral Services are 3:00 p.m. Friday, February 15, 2019, at Good Shepherd Lutheran Church in Marshall. Interment be at 11:00 a.m. Saturday, February 16, 2019, at the Wildwood Cemetery in Wheaton, Minnesota. Visitation will be held from 5:00 – 8:00 p.m. Thursday, February 14, 2019, at the Hamilton Funeral Home in Marshall. A prayer service is scheduled for 7:00 p.m. Visitation will continue one hour prior to the service, from 2:00 – 3:00 p.m. on Friday at the church. Arnold Stanley Zimmerman was born March 16, 1933, to William and Evelyn (Wilts) Zimmerman in Wheaton, Minnesota. He was baptized on June 21, 1934 and confirmed in 1952 in the Lutheran faith at St. John’s Lutheran Church in Wheaton. He attended country school for eight years graduating on June 16, 1947. He then attended West Central School of Agriculture for 4 years graduating in 1951. On June 6, 1953, Arnie was united in marriage to Marilyn JoAnne Burg. The couple was blessed with two daughters, Donna and Kristi. Arnie was drafted into the service in November of 1954. He served two years of active duty, spending 18 months in Germany. He was honorably discharged on November 9, 1956. After the service, Arnie was employed by the Minnesota Highway Department, working on a survey crew. He located the route of Interstate 94 from Alexandria to Moorehead. In the Fall of 1959, Arnie attended NDSU to obtain a degree in Pharmacy. He graduated in 1963 and worked as a pharmacist in Fargo, Faribault, Truman, and New Ulm. In 1970, Arnold moved to Marshall and became owner of Sward Kemp Drug. During his tenure of business in Marshall, he purchased The Ben Franklin Store, Gags Drug, and Cline Pharmacy. He consolidated these businesses into his own A to Z Health Mart Pharmacy. He owned and operated that business until 1995 when he sold it to Thrifty White Drug. He continued to work as Chief Pharmacist for Thrifty and later a relief pharmacist in the surrounding area. Arnie “officially” retired in 2012. In 2011, Arnold was united in marriage to Rosemary Wilmes. He was an active member of Good Shepherd Lutheran church in Marshall and a frequent Hospice volunteer. Arnie was a past member of the Marshall Area Chamber of Commerce and a member of the Redwood River Sportsman Club. He was an avid sportsman who enjoyed hunting, fishing and golfing. Arnie was a collector. He enjoyed hunting down discontinued pharmacy merchandise and other health related items. In his spare time, he thoroughly appreciated yardwork. He was a true gentleman, always very kind and gentle. Arnold Stanley Zimmerman died on February 11, 2019, in Marshall, Minnesota, at the age of 85 years, 10 months, and 26 days. Blessed be his memory. Arnie is survived by his loving wife Rosemary of Ghent, MN; daughters, Donna (Mike) Caron of Lake Shore, MN, Kristi (Robert) Jamison of Salina, KS; grandchildren, Chase (Nealey) Tubbs of Bessmer, AL, Jacob (Missy) Caron of Waterville, MN, Whitney (Jerome) Smith of Auburn, AL; great-grandchildren, Machauley, Caleb, Javien, Jaslyn, Jaxdon, Levi, and Layne; brother, Darrell (Diana) Zimmerman of Wheaton, MN; step-daughters, Dawn Wood (Brian Fagerstrom) of Hopkins, MN, Vicki (Daryl) St. Aubin of Marshall, MN; step-grandchildren, Christopher (Halee) St. Aubin, Stephanie (Garett) Slater, Janae Wood, Tori St. Aubin, Marissa Wood; many other relatives and friends. Preceding him in death are his parents; brothers, William Jr., Marlyn, Ronald; sister, Darlene Behan; brother-in-law, Lynn Behan; and sister-in-law, Leila Jo Zimmerman. The family of Arnold Zimmerman would like to thank you for your kindness and sympathy during their time of sorrow. Your thoughtfulness will always be remembered.

The family of Arnold "Arnie" Zimmerman created this Life Tributes page to make it easy to share your memories.

Send flowers to the Zimmerman family.