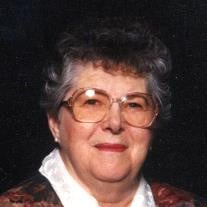 Asther Presuhn, age 95, of Marshall and formerly of Russell, Minnesota, passed away on Tuesday, May 3, 2016, at the Divine Providence Health Center in Ivanhoe, Minnesota. Funeral Services are 11:00 AM Saturday, May 7, 2016, at First Lutheran Church in Marshall. Interment will be at Ft. Snelling National Cemetery on Monday, May 9. Visitation will be from 4:00 – 7:00 PM Friday, May 6, 2016, at the Hamilton Funeral Home in Marshall. Visitation will continue one hour prior to the service, from 10:00 – 11:00 AM, on Saturday, at the church. Asther Bernice Polesky was born June 24, 1920, at home in Lynd, Minnesota, to Albert and Bertha (Gudmundson) Polesky. She was baptized and confirmed at First English Lutheran Church in Russell, Minnesota. Asther attended school in Russell and graduated in with the1938 class at Russell High School with honors in music and writing. On September 11, 1938, Asther was united in marriage to Elmer Burckhardt in Pipestone. The couple spent 37 years of marriage together and had 8 children while living in Russell. She worked as a loving homemaker and mother and then started to cook at various places. She moved to Marshall in 1977. On April 11, 1980, She was married to Cliff Presuhn at First Lutheran Church in Marshall. The couple shared 25 years of marriage before Cliff passed away in 2005. In 2010, when Asther needed more assistance with her daily care, she moved to the Divine Providence Health Center in Ivanhoe. Asther was the main cook at Mike’s Café for many years, and also cooked at many other places. She managed the cafeteria at Southwest State University for 15 years before retiring. She served as past president of the Eagles Auxiliary, was a member of the VFW Auxiliary, and she was a member of First Lutheran Church in Marshall. Asther enjoyed playing cards and Bunko, traveling all over the country and Europe, especially to Arizona for many years. She loved spending time with her family. She will be dearly missed. Asther entered her heavenly home on Tuesday, May 3, 2016, in Ivanhoe, Minnesota, at the age of 95 years, 10 months, and 9 days. Blessed be her memory. Asther is survived by her five children, Dennis (and Bonnie) Burckhardt of Emery, SD, Lennie Burckhardt of Tyler, Linda (and Sheldon) Schultz of Tyler, Terry (and Lori) Burckhardt of Lake Benton, Jeffery (and Vikki) Burckhardt of Slayton; 23 grandchildren; 24 great-grandchildren; 5 great-great-grandchildren; sister, Darleen Chase of Washington State; nephews, nieces, other relatives and many friends. She was preceded in death by her parents, Albert and Bertha Polesky; husbands, Elmer Burckhardt and Cliff Presuhn; infant daughter, Darlis Joyce Burckhardt; sons, Stanley Burckhardt and Daniel Burckhardt; grandchildren, Bradley Burckhardt, Michael Burckhardt, Alizabeth Leathers; and brother, Gordon Polesky. The family invites attendees to the church basement for a luncheon immediately following the funeral service.

Asther Presuhn, age 95, of Marshall and formerly of Russell, Minnesota, passed away on Tuesday, May 3, 2016, at the Divine Providence Health Center in Ivanhoe, Minnesota. Funeral Services are 11:00 AM Saturday, May 7, 2016, at First Lutheran... View Obituary & Service Information

The family of Asther Bernice Presuhn created this Life Tributes page to make it easy to share your memories.

Asther Presuhn, age 95, of Marshall and formerly of Russell,...

Send flowers to the Presuhn family.