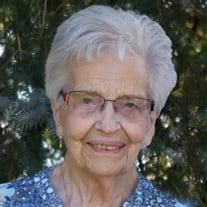 Audrey Hostetler, age 95, of Cottonwood, Minnesota, passed away on Sunday, August 9, 2020, in Moorhead, Minnesota. Audrey died of cancer at the home of her daughter, surrounded by her children and grandchildren. Funeral Services are 11:00 a.m. Friday, August 14, 2020, at Christ Lutheran Church in Cottonwood, Minnesota. Interment will follow in the church cemetery. A walk-through visitation will be prior to the service, from 9:30 – 11:00 a.m., on Friday, August 14, 2020, at Christ Lutheran Church in Cottonwood. Occupancy limits and social distancing must be observed throughout all services. Masks are now also required at all indoor gatherings. Audrey LaVonne Aamodt was born to George and Mabel (Roti) Aamodt on September 16, 1924, in Cottonwood, Minnesota. She began her education as a Norwegian speaker in rural school near their Vallers township farm. She was baptized Nov 2, 1924, and confirmed her faith on June 11, 1939, both at Silo Lutheran Church in Cottonwood. Audrey graduated from Cottonwood High School in 1941 and then began college at Concordia College, Moorhead, Minnesota, at the age of 16. She obtained a two-year business degree and returned to Cottonwood to work at the insurance office. She returned to Concordia mid school year in 1944 and graduated in 1946 with majors in Business and English education. While at college, Audrey played kettle drums in the band. Later attending Homecoming events at Concordia was a priority even after her 70th reunion. On June 21, 1947, Audrey was united in marriage to Delbert “Bud” Hostetler at Silo Lutheran Church in Cottonwood where they lived most of their married life. Audrey enjoyed teaching one year in Belview, Minnesota, and then spent the rest of her teaching career in Cottonwood. She maintained contact with many of her students and attended class reunions in both Belview and Cottonwood as long as she was able. After retiring from teaching Audrey taught Adult Basic Education and compiled the school census each year, maintaining contact with many Cottonwood families. She served as community representative on what is now the Southwest Health Board, in various capacities at Christ Lutheran Church and was active in the Senior Meal site. Audrey was active in the quilting group at church, and enjoyed traveling to national WELCA gatherings, often with Marlys Lund. Audrey was an avid reader, both of literature and news. Until March of 2020, Audrey received two daily papers, which were not discarded until she had thoroughly read them. After Bud died, Audrey remembered how much she enjoyed driving and made many trips to visit family. Her curiosity about people, the world, and local happenings kept her active. Audrey thoroughly enjoyed a lively conversation over a cup of coffee. Audrey enjoyed tending her flower beds and organizing Cottonwood scrapbooks of historical note. Audrey was a football fan, following the Vikings and Gophers, as well as Twins baseball. Her four trips to Norway made her genealogy research come to life. Up until this year Audrey was happy to report that she had done her own taxes but took them in to her accountant to be reviewed. In March of this year, Audrey moved to Moorhead, to live with her daughter and son-in-law until her death. Audrey is survived by her daughter, Mary (Jim) Rolf of Moorhead; son, Gary (Susan) Hostetler of Madison, WI; grandchildren, Walter (Ann) Rolf and Audrey (Shawn) Adrian; great-grandchildren, Jakob Rolf, Gracia Rolf, James Adrian, Alette Adrian, Thea Adrian; and sister, Marilyn Nissen of Moorhead. Audrey was preceded in death by her parents, George and Mabel Aamodt; husband, Delbert Hostetler; and brother-in-law, Elwyn Nissen. Blessed be her memory. Memorials may be given to Christ Lutheran Church Cemetery Fund or Hospice of the Red River Valley.

Audrey Hostetler, age 95, of Cottonwood, Minnesota, passed away on Sunday, August 9, 2020, in Moorhead, Minnesota. Audrey died of cancer at the home of her daughter, surrounded by her children and grandchildren. Funeral Services are 11:00 a.m.... View Obituary & Service Information

The family of Audrey LaVonne Hostetler created this Life Tributes page to make it easy to share your memories.

Send flowers to the Hostetler family.