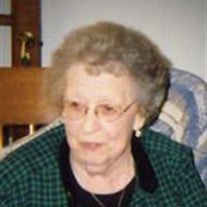 Audrey A. Monson, age 84, of Marshall, passed away on Thursday, April 17, 2008 at the Avera Marshall Regional Medical Center. Funeral services will be 11:00 A.M. Tuesday, April 22, 2008 at the Open Door Assembly Of God in Marshall. Burial will be in the Marshall Cemetery. Visitation will be 4:00 P.M. to 8:00 P.M. Monday with a 7:00 P.M. prayer service at the Hamilton Funeral Home in Marshall. Audrey Annette Monson was born to Harry Ducan and Cora Frances (Hamilton) Snodgress on August 29, 1923 at Currie, Minnesota. She was baptized at the Presbyterian Church in Currie and attended rural school near her parents farm. On March 5, 1949, Audrey was united in marriage to Wayne Monson at Pipestone. They lived on 7th Street in Marshall and then moved to Park Rapids where they lived for awhile. They moved back to Marshall where they lived on Soucy Drive. Audrey worked various jobs for the Hauge Egg Company. She retired in 2000. Audrey passed away at the Avera Marshall Regional Medical Center on Thursday, April 17, 2008. She had reached the age of 84 years, 7 months and 19 days. She is survived by her Son and daughter-in-law, Douglas and Susan Monson of Balaton; grandchildren, Paula and Eric Myhre, Craig Ranschau, Eric and Lauren Strom, and Renae and Mark Galbraith; great grandchildren, Jon and Adam Myhre, Cody and Jordan Ranschau, Sierra Strom, and Dalton, Samantha and Tristin Galbraith; a brother and sister-in-law, Darrell and Vivian Snodgress of Soldotna, Alaska; also many nieces and nephews. She was preceded in death by her parents; husband, Wayne on April 15, 1988; sister, Starr Snodgress; and brother, Bill Snodgress. Audrey was a faithful member of the Open Door Assembly Of God at the time of her death. She also enjoyed playing games, cards and visiting with the ladies at the Windsong Apartments. Blessed Be The Memory Of Audrey Monson

Audrey A. Monson, age 84, of Marshall, passed away on Thursday, April 17, 2008 at the Avera Marshall Regional Medical Center. Funeral services will be 11:00 A.M. Tuesday, April 22, 2008 at the Open Door Assembly Of God in Marshall. Burial will... View Obituary & Service Information

The family of Audrey Annette Monson created this Life Tributes page to make it easy to share your memories.

Send flowers to the Monson family.