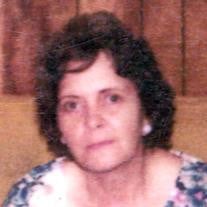 Audrey Root, age 89, of Russell, Minnesota, passed away on Sunday, April 10, 2016, at her home in Russell. Funeral Services are 11:00 AM Thursday, April 14, 2016, at the Hamilton Funeral Home in Marshall. Interment will follow in the Russell Cemetery. Visitation will be held one hour prior to the service, from 10:00 – 11:00 PM, on Thursday at the Hamilton Funeral Home. Clergy Officiating: Rev. Ryan Martin Active Casket Bearers: Raymond Root Jr., Joe Root, Scott Root Honorary Casket Bearers: Geraldine Skelton, Margie Dwire, Mary Girardi, Jeanine Root Audrey Florence Oberg was born May 6, 1926, in Cohasset, Minnesota. She was one of eight children born to John and Alma (Denue) Oberg. Audrey grew up in Cohasset and was baptized at the Lutheran church there. Audrey’s mother passed away when she was just 10 years old and she went to live in an orphanage in Owatonna where she continued her schooling. During the second World War, Audrey was actively welding back home to support the efforts overseas. On November 4, 1950, Audrey was united in marriage to Raymond Leonard Root and the couple started a family as they moved around. They came to the Russell are in 1967 and have been living in town since 1969 where Audrey was a devoted homemaker and mother. Ray Sr. and Audrey had 7 children and shared over 47 years together before he died on April 12, 1998. Audrey was a member of the Russell Baptist church until its closing. She also loved to crochet and spend time with her children. Audrey Root died on Sunday, April 10, 2016, in Russell, Minnesota 26 days before her 90th birthday. Blessed be her memory. She is survived by her seven children, six grandchildren, four great-grandchildren, one sister, nieces, nephews, other relatives and friends. Audrey was preceded in death by her parents, husband, two brothers, and four sisters.

Audrey Root, age 89, of Russell, Minnesota, passed away on Sunday, April 10, 2016, at her home in Russell. Funeral Services are 11:00 AM Thursday, April 14, 2016, at the Hamilton Funeral Home in Marshall. Interment will follow in the Russell... View Obituary & Service Information

The family of Audrey Florence Root created this Life Tributes page to make it easy to share your memories.

Audrey Root, age 89, of Russell, Minnesota, passed away on Sunday,...

Send flowers to the Root family.