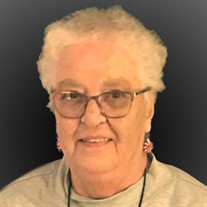 Barbara Halling, age 78, of Ghent, Minnesota, died on Sunday, February 21, 2021, at the Avera McKennan Hospital in Sioux Falls, South Dakota. Memorial Services will be at 11:00 a.m. Thursday, February 25, 2021, at Christ United Presbyterian Church in Marshall, Minnesota. Interment will follow in the Marshall Cemetery. A walk-through traditional visitation will be held from 4:00 - 7:00 p.m. Wednesday, February 24, 2021, at the Hamilton Funeral Home in Marshall. Occupancy limits and social distancing must be observed throughout all services. Masks are required at all public indoor gatherings. Barbara Ann Eilders was born to Bernart and Sophia (Popkes) Eilders in Lyon County, Iowa, on March 30, 1942. She was baptized and confirmed in the Presbyterian Church. Barbara attended elementary school in George, Iowa, and later moved with her family to Minnesota. She graduated from Fulda High School with the class of 1960. Barbara continued her education at Mankato Commercial College for banking. On October 23, 1965, Barbara was united in marriage to Leon Halling at the Westminster Presbyterian Church in Worthington. The couple made their home in Marshall, Minnesota, and had two children. Barbara worked at the Norwest Bank (now Wells Fargo), before staying at home to raise her growing family. In 1971, the family moved to their farm outside of Ghent, where they still live. As her children grew older, Barbara began working at BH Electronics in Marshall until her retirement on December 30, 2005. She had over 18 ½ years of service with them. Barbara was a member of Christ United Presbyterian Church and enjoyed drinking coffee with the “BH Ladies Club”. Family was especially important to Barbara and she thoroughly enjoyed caring for her family, and animals on their hobby farm. She also spent many hours crocheting, cross-stitching, crafting, camping, fishing, reading books, and watching the Minnesota Twins on the TV. Barbara Halling died on Sunday, February 21, 2021, in Sioux Falls, South Dakota, at the age of 78 years, 10 months, and 22 days. Blessed be her memory. She is survived by her husband, Leon Halling of Ghent; children, Denise (Owen) Prellwitz of Marshall, Wayne (Larissa) Halling of Bemidji; grandson, Jordan Prellwitz (Deena Weber) of Marshall; siblings, Thelma (Gary) Kruse of Rapid City, SD, Loretta Campbell of Evansville, Susanne Eilders of Milroy; brother-in-law, John (Karen) Halling of Granite Falls; other relatives, nieces, nephews, and friends. Barbara was preceded in death by her parents, Bernart and Sophia Eilders and her brother, Barry Eilders.

The family of Barbara Ann Halling created this Life Tributes page to make it easy to share your memories.