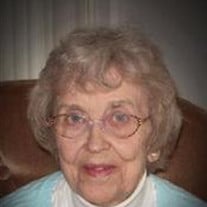 Marshall: Berget “Bea” Taintor, age 88, of Marshall, passed away at the Avera Morningside Heights Care Center on Monday, November 19, 2012. Funeral services will be 2:00 P.M. Friday, November 23rd at Christ United Presbyterian Church. Visitation will begin at the church at 12:30 P.M. Friday. Burial will be in the Marshall Cemetery. Berget “Bea” was born on July 3, 1924 in Benteru, Grand Forks County, ND to parents Torjus and Emma (Syrtveit) Torkelson. She was baptized and confirmed at East Walle Lutheran Church. Bea graduated from Crookston High School in 1943 and continued her education as a cadet nurse at Deaconess Hospital School of Nursing. She completed her degree as a RN in 1947. Bea was united in marriage to R. WayneTaintor on June 30, 1950 at East Walle Lutheran Church. To this union four children were born: Mark, Paul, Sue and Tom. While they were living in Louisville, KY, Bea worked with polio patients. They relocated to St. Paul where she worked at Anchor Hospital. Moving back to Louisville and then onto New York, Bea worked at Hackensack General Hospital. In 1957, Bea and Wayne moved to Marshall and Bea became a fulltime homemaker occasionally filling in at Doctor Wayne’s office when needed. Bea’s family was the love of her life, doing things with and for them. She was a very active member of Christ United Presbyterian Church participating in the choir, UPW, Adult Sunday School and also filled in as organist. Bea was a charter member of the Variety Study Club and volunteered for the Red Cross. Bea enjoyed crossword puzzles, needlepoint and playing the piano. Bea passed away surrounded by her loving family at Avera Morningside Heights Care Center on Monday, November 19, 2012. She had reached the age of 88 years, 3 months and 16 days. She is survived by her husband, Wayne of Marshall; her children, Mark (and Julie) Taintor of Chanhassen, MN, Paul (and Mary Jo) Taintor of Silver Bay, MN ,Sue (and Scott) Landon of Carol Stream, IL, and Tom (and Cindy) Taintor of Apple Valley, MN: twelve grandsons and one granddaughter, Micah, Matthew, Marcus, Luke, Ryan, David, Katie, Eric, Brian and Seth Taintor, Paul, Jeremy and Jonathan Landon; six great grandchildren, Kenan, Joshua, Levi, Brook, Rowan and Charlie; brother, Norman Torkelson of Cumberland, WI; and sister-in-law, Viola Torkelson of West Lebanon, NH. She was preceded in death by her parents; three brothers, Arthur, Aleck and Arnold; and three sisters, Signe, Hilda and Norma. Blessed be the memory of Bea Taintor Please designate memorials to Prairie Home Hospice

The family of Berget "Bea" Taintor created this Life Tributes page to make it easy to share your memories.

Send flowers to the Taintor family.