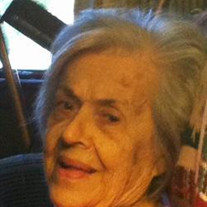 Bernice Christianson, age 98, of Marshall, Minnesota, died Wednesday, October 29, 2014, at her home in Marshall, Minnesota. Funeral services are Saturday, November 1, 2014, 1:30 PM, at Wesley United Methodist Church in Marshall, with interment following in the Marshall City Cemetery. Visitation will be held Friday, October 31, from 6:00 – 8:00 PM at Hamilton Funeral Home in Marshall with a prayer service at 7:30 PM. Clergy Officiating: Wes Johnson Organist: Sandy Buesing Congregational Hymns: “Nearer My God To Thee,” “Onward Christian Soldiers,” “Just As I Am” Bernice Alicia Christianson was born February 2, 1916 in Chicago, Illinois. She was a twin, having two brothers and one sister, she was the daughter of Bruno and Stella Bikin. She graduated from high school in Chicago then attended The Academy of Music where she excelled in piano. Music brought peace and excitement into her life which she shared with her family, passing that passion on to her children and grandchildren. After graduating, Bernice joined Mandel Brothers in Chicago where she met her future husband, Chris. They shared like interests of golfing, horseback riding, music, and dining out. She was a natural golfer and it seemed she could talk to horses. She married Vernon Christianson in 1940. In 1943, she joined Vernon on the farm in Minnesota, carrying their newborn son in a basket on the train. It was a busy new life and she grew to enjoy flower and vegetable gardening, making a welcome home, and caring for her husband. Food was always homemade and plentiful. She said she finally had to learn to cook and multi-task because her life was so busy. Bernice was a member of The Order Of The Eastern Star and fulfilled the duties and joys of being Dad’s “trailer” during 1965, when she served as State Worthy Grand Patron. An active member of Wesley United Methodist Church, she served as Sunday School teacher for years and as member, and president, of UMW taking on the gigantic task of coordinating the Christmas Bazaar (which was all exhausting, joyous, successful, and fulfilling.) She was a leader in the local Republican Party and Good Thoughts Study Club. In 1958, Bernice and Vernon moved to Marshall where she gave her design ideas to the architect, Mr. Thomas, and he incorporated them into their new home. Family always came first for Bernice. She was the caregiver of the family – to both grandmothers, nephew Stevie, and sister Stell. When her granddaughters were young, she loved and supported them in every way she could. Her granddaughter, Leah, graciously shared her son and daughter by pictures and letters and phone calls from California. She loved it. Her husband died October 29, 2006, 8 years ago to the day. Blessed be her memory. Bernice is survived by her son, JV; daughter, Judeth; brother, hank; granddaughter, Leah; and two great-grandchildren, Josiah and Azriela. Bernice is preceded in death by her parents and her husband.

The family of Bernice Alicia Christianson created this Life Tributes page to make it easy to share your memories.

Send flowers to the Christianson family.