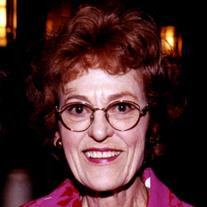 Bernice Club, age 95, of New Hope and formerly of Edina, Minnesota, entered eternal life during the early hours of Friday, April 6, 2018, at St. Therese of New Hope. Mass of Christian Burial is at 1:00 p.m. Wednesday, April 11, 2018, at St. John Cantius Catholic Church in Wilno, Minnesota. Interment will follow in the church cemetery. Visitation will be held one hour prior to the service, from Noon – 1:00 p.m., on Wednesday, at the church. Bernice Delores Club was born on April 27, 1922, in Wilno, Minnesota. She was the youngest of eight girls born to Stanley and Rose (Starzak) Club. Bernice grew up in Wilno and Marshall, graduating from the Marshall High School in 1941. Shortly thereafter, at age 19, she and two friends moved to Santa Monica, California. Bernice worked at Douglas Air Craft in Santa Monica as “Rosie the Riveter.” As the war ended, she worked at MGM Studios as a make-up artist. She later moved to Los Angeles and worked at Bank of America before becoming an executive secretary to the CEOs of ARCO and British Petroleum. She retired in 1990 and moved back to Edina, Minnesota. She resided at St. Therese Nursing Home for the last four years. Her enjoyments in life included golf, reading, watching old movies, traveling, and visiting family. Bernice died on Friday, April 6, 2018, just 3 weeks shy of her 96th birthday. Bernice is survived by her 19 nieces and nephews, other family, and friends. She will be deeply missed. She was preceded in death by her parents and seven sisters: Pauline, Veronica, Cecilia, Frances, Lucy, Martha, and Evelyn.

The family of Bernice Delores Club created this Life Tributes page to make it easy to share your memories.

Send flowers to the Club family.