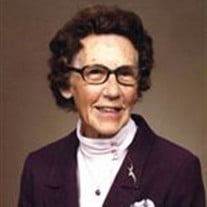 Berniece I. Larson, age 101, of Marshall passed away Sunday, February 3, 2008 at the Minneota Manor Health Care Center. Funeral Services will be at 11 AM on Friday, February 8, 2008, at Wesley United Methodist Church in Marshall. Burial will be in the Marshall Cemetery. Visitation will be from 4 to 8 PM with a prayer service at 6:30 on Thursday, February 7, at the Hamilton Funeral Home in Marshall. Visitation will continue one hour prior to the service on Friday, at the church. Berniece Irene Madden was born on February 10, 1906, at the farm home in Lyon Township, Minnesota. She was the daughter of Marcellus and Louise (Krumling) Madden. Berniece was baptized and confirmed at the Lynd Methodist Church. She attended school in Lyon County, District #2, and then went on to graduate from Marshall High School in 1925. On June 16, 1927, she was united in marriage to Lawrence Larson on the Madden Family Farm. They lived and farmed in Sodus Township on the Lyon County farm home. Berniece was a member of the Wesley United Methodist Church in Marshall and was a part of the church circle, and study club - G of K for 30 years. She taught Sunday school for 25 years and was a 4-H leader for 20 years. Berniece was also active in the Lynd and Marshall Senior Centers and a member of several other clubs in the community. Berniece’s enjoyments in life included sewing, crocheting, gardening (especially vegetables and watermelons), flowers, traveling in the motor home, and spending time with family and friends. She really loved life! Her hands were never idle; she didn’t just sit and watch TV. If she wasn’t visiting with friends, she was busy doing handiwork. Berniece is survived by her daughter, Anita (and Jim) Thompson of Mounds View, MN; grandchildren, Mark (and Donna) Thompson and Jon Thompson; and great-grandchildren, Anthony, Erica, and Anna. She was preceded in death by her husband, Lawrence (in 1997); parents; sisters, Alta (in 1984) and Gladys (in 1987); and brothers, Roy (in 2000), Leo (in 1995), Kenneth (in 2001), Merlin (in 1962), and Lloyd (stillborn in 1911). Please designate any memorials to the music fund at Wesley United Methodist Church in Marshall. Blessed Be the Memory of Berniece Larson.

Berniece I. Larson, age 101, of Marshall passed away Sunday, February 3, 2008 at the Minneota Manor Health Care Center. Funeral Services will be at 11 AM on Friday, February 8, 2008, at Wesley United Methodist Church in Marshall. Burial will... View Obituary & Service Information

The family of Berniece Irene Larson created this Life Tributes page to make it easy to share your memories.

Send flowers to the Larson family.