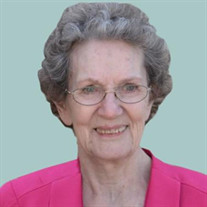 Bette Harman, age 93, of Hanley Falls, Minnesota, died on Thursday, October 14, 2021, at her daughter’s residence in Winnemucca, Nevada. Funeral Services are 11:00 a.m. Saturday, October 30, 2021, at The Church of Jesus Christ of Latter-day Saints in Marshall, Minnesota. Interment at Yellow Medicine Lutheran Cemetery will follow a luncheon. A Visitation will be held from 5:00 – 8:00 p.m. Friday, October 29, 2021, at the Hamilton Funeral Home in Marshall. Visitation will then continue one hour prior to the service on Saturday, from 10:00 a.m. until the time of services at 11:00 a.m., at the church. Bette was born to Maude Marie Crane and Melvin Reed Huggins on December 29, 1927, in Murray, Utah. She was the fourth of eight daughters and one son and was an identical twin to Beth Huggins Graff. At age nine, her family moved to Rawlins, Wyoming, where she graduated from high school. Following graduation, Bette and Beth attended the University of Utah where they earned their bachelor of science in nursing degrees in 1952. Bette met James Leonard Harman in 1948 while Len served as a missionary for The Church of Jesus Christ of Latter-day Saints in Rawlins, Wyoming. Len and his companion traveled to Rawlins to attend the funeral of Bette’s only brother, Harold, who died in a tragic accident at age 11. As the story goes, as Len walked towards the house, the twins were on the front porch, identical in every way—including their dress—when Len told his companion he was going to marry “that one,” pointing to Bette. His companion was obviously befuddled as they both appeared exactly the same. But true to his word, Bette and Len were married on September 10, 1952; at Len’s passing in 2010, the two had been married for 57 years. The couple made their home in Granger (now West Valley City) Utah, where they welcomed six children and Len built a successful architectural career. In 1970, they accepted a call from The Church of Jesus Christ of Latter-day Saints to move to Montevideo, Uruguay, where Len served as the church architect for South America. Bette readily agreed to the adventure along with her children, ranging in age from 16 to 2. She learned to speak Spanish and love the people. She also served as the United States Embassy nurse for Uruguay, and the mission nurse for church missionaries stationed in the area. Upon their return to the United States in 1975, the family lived in Hunter, Utah, and Taylorsville, Utah, until 1989 when they moved to Morgan, Minnesota, and then Hanley Falls, Minnesota, to work closer to family. Bette was a gifted homemaker, seamstress and nurse, but most of all, she loved her children, cherished her grandchildren and especially delighted in her great-grandchildren; her family was a constant source of pride and joy. She also loved her fellow congregants at The Church of Jesus Christ of Latter-day Saints wherever she lived and found great peace and hope in living her faith. Bette is survived by her children, Brent (Pam) Harman of Houston, TX, Rhonda (Randall) Bennett of Hanley Falls, Lisa (David) Ricketts of Taylorsville, UT, Daniel (Wendy) Harman of South Jordan, UT, Nicole (Kent) Maher of Winnemucca, NV; 36 grandchildren; 49 great-grandchildren; sisters Marcia Clay of Anchorage, AK, and Georgia (Lewis) Bateman of Johnston, CO; nieces, nephews, other relatives, and friends. She was preceded in death by her husband; her parents; daughter Stacey Harman; grandson Elisha Ricketts; brother Harold Huggins; and sisters Geraldine Huggins, Lois Hamblin, Beth Graff, Marie Eyre and Glenda Huntington.

The family of Bette Harman created this Life Tributes page to make it easy to share your memories.

Send flowers to the Harman family.