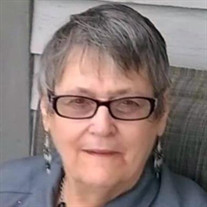 Betty Ann Sorenson was born on January 8, 1943, in Lynd, Minnesota, to Edward and Regina (Tholen) Sorenson. She was baptized at the Balaton Methodist Church and later confirmed at the Lynd Methodist Church. Betty attended school in Lynd, graduating with the class of 1961. On November 4, 1961, Betty was united in marriage to Douglas Arndt. The couple made their home in California while Doug was stationed there. Betty managed an apartment complex for a few years before their return to Minnesota. She then ran a daycare before going to work at Schwan’s where she spent 30 years on the assembly lines. Doug and Betty raised three children and shared 53 years of marriage together before Doug's death in December of 2014. Betty was a faithful member of Grace First Parish in Russell and served with the Ladies’ Auxiliary. She liked things a certain way and was not afraid to say it like it is, some may have even called her stubborn. Betty enjoyed playing cards, reading, coloring, gardening, and spending time with her family and friends. Betty Arndt died peacefully on May 11, 2020, in Tyler, Minnesota, at the age of 77 years, 4 months, and 3 days. Blessed be her memory. She is survived by her 3 children, Brenda (and Mark) Matthys of Cottonwood, Darcie Adkison of Canby, Brian Arndt of Russell; 4 grandchildren, Hailey, Peyton, Nicholas, Trent; 6 siblings, James (and Carol) Sorenson of Lake Benton, Richard (and Cheryl) Sorenson of Idaho, Elaine (and Lyle) Schenck of Florida, Marvin (and Colleen) Sorenson of Detroit Lakes, Mary (and Dennis) Lidtke of Westbrook, Dan Sorenson of Marshall; Brother in law, Larry (Marian) Arndt of Texas; sister in law, Maureen Arndt of Marshall; nephews, nieces, other relatives and many friends. She is preceded in death by her husband, Douglas Arndt; parents, Edward and Regina Sorenson; parents-in-law, Rudolph and Bertha Arndt; sisters-in-law, Judy Sorenson, Judy Sorenson; and a brother-in-law, Richard Arndt.

Betty Ann Sorenson was born on January 8, 1943, in Lynd, Minnesota, to Edward and Regina (Tholen) Sorenson. She was baptized at the Balaton Methodist Church and later confirmed at the Lynd Methodist Church. Betty attended school in Lynd, graduating... View Obituary & Service Information

The family of Betty Ann Arndt created this Life Tributes page to make it easy to share your memories.