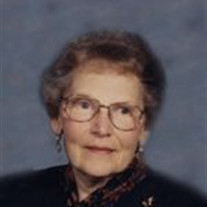 Betty M. Brandt, of Pine City, MN, died on Monday, May 19, 2008 at Abbott-Northwestern Hospital in Minneapolis. Funeral Services are scheduled for 11:00 AM on Saturday, May 24, at Our Savior’s Lutheran Church in Milroy, MN. Visitation will be held from 4:30 to 8 PM on Friday, May 25, with a 6:30 prayer service at the Hamilton Funeral Home in Marshall. Visitation will continue one hour prior to the service on Saturday, at the church. Burial will be in the St. Michael Catholic Cemetery. Online condolences are available at www.hamiltonfh.com. Betty Mae Jensen was born on February 25, 1925 in Vesta, MN. She was the daughter of Alfred and Bessie (Osmonson) Jensen. She was the youngest of five children and they lived on a farm in Lucan from the time she was sixth months old. She attended a country school through eighth grade in Lucan and was then able to attend high school for two years. In 1942 she graduated from Milroy High School. At the age of 19, on April 13, 1944, Betty was united in marriage to Gerald Schueller. This marriage was blessed with 3 wonderful children, John Douglas, Gerald Jr, and Richard Allen. In the early years they lived on a farm in Vesta, MN. Shortly after the birth of their third son, Richard, the family moved out to St. Louis, MO. While in Missouri they lived in 30 different county seats, moving each month to a new town. After 3 years on the road they returned to Minnesota where they lived in Walnut Grove and later in Milroy. They celebrated 32 years of marriage before Gerald’s passing. Betty was a well loved woman who celebrated her life with Donald Mauland and Everett Hedin before marrying Forrest Brandt on July 25, 1992. Together they made a home in Clarkfield, MN, and later in Annandale, Marshall, Redwood Falls and finally settled in their current home in Pine City, MN. They enjoyed visiting with friends and playing card games for most of a long afternoon. Together they did lots of traveling around the state and even spent a few winters down in Texas. Betty’s greatest pleasure in life was making each and every person she met feel at home and welcomed whenever you came to visit. That meant large meals for all – one that wasn’t complete without the chocolate cake she made from scratch! She cared deeply about her family and talked of their accomplishments in life to anyone who would listen. She enjoyed traveling, playing cards – especially PHASE 10, visiting with friends and neighbors and taking care of (okay..spoiling!) her grandchildren and great-grandchildren. Betty was working on her life story and shared with her grandchildren the following words, “It wasn’t easy, but never dull. Had a great full life and my wish for you will be that you will be as lucky as I have been.” She’s been fondly referred to as “Mama Bear”, “Spitfire”, and one “Classy Lady”; a woman who may have been lacking in height…was never lacking in love. She will be missed. Betty passed away on May 19, 2008 at Abbott Northwestern hospital where she was surrounded by those people most precious to her. Betty is survived by her husband, Forrest Brandt of Pine City, MN; son, Richard Schueller of Clarkfield, MN; granddaughter, Victoria Giese of Mason City, IA and her sons Devin & Dillon; grandson, Jay Schueller and his wife Rebecca of Pine City, MN and their children Emily & Gavin; grandson, Gerald Schueller and his wife Jennifer of Ramsey, MN and his son Peyton; sister, Elda Giese of Tracy, MN; step-children, Robert Brandt, Calvin Brandt, David Brandt, Charlotte Christianson, Janice Brandt and their children and grandchildren; and many nieces, nephews, cousins and friends. Betty is preceded in death by her Parents, Alfred & Bessie Jensen; sisters, Neva Scott and Verna Giese; brother, Derwin Jensen; husband, Gerald Schueller; and sons, Gerald Jr. and John Douglas. Blessed be the Memory of Betty Brandt.

Betty M. Brandt, of Pine City, MN, died on Monday, May 19, 2008 at Abbott-Northwestern Hospital in Minneapolis. Funeral Services are scheduled for 11:00 AM on Saturday, May 24, at Our Savior&#8217;s Lutheran Church in Milroy, MN. Visitation... View Obituary & Service Information

The family of Betty Mae Brandt created this Life Tributes page to make it easy to share your memories.

Send flowers to the Brandt family.