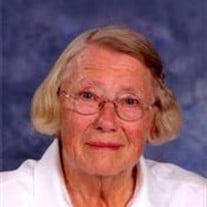 Funeral Services for Betty Ann Erickson, 85, of Marshall will be at 10:30 a.m., Monday October 17, at Holy Redeemer Church in Marshall, MN. Visitation will be from 4 – 7 p.m.with a 4:00 P.M.Roasry service and 5:00 P.M.prayer service on Sunday October 16th at the Hamilton Funeral Home in Marshall. Burial will be in Calvary Catholic Cemetery in Marshall following services on Monday. Betty passed peacefully on October 12 with her family by her side. Betty was born on December 31, 1925, to Harry and Ann (Vockrodt) Jepsen in Pipestone, Minnesota. She graduated from Pipestone High School in 1943 and then worked for the J. W. Hilliard Food Company in Pipestone for three years. She married Kenneth J. Erickson on July 31, 1946, at the Zion Lutheran Church in Pipestone. They moved to Pierre, SD, where they lived briefly before moving to Brookings, SD, to attend South Dakota State University. While at SDSU, they also managed the Kampus Kafé. When Ken completed his graduate work, they moved to Aberdeen, SD and Northern State University, where Ken began what would become a 45-year career in education. In 1970 they moved to Marshall where Ken taught at SMSU. Betty was also an educator, having taught religious education for more than 20 years. She began this at Sacred Heart Catholic Church in Aberdeen, SD and continued at Holy Redeemer Church in Marshall. In 1974 she began doing administration for the Religious Education Program and in 1978 she became secretary at Holy Redeemer Church. She retired from this position in 1990 with an accommodation from Pope John Paul II. Betty was a member of the Holy Redeemer Council of Catholic Women, Catholic Daughters of America, Sarah Circle, Chic Hat-itude of Marshall, Happy Homemakers Extension Club and the Hospital Auxiliary. Betty was a loving wife, mother, and grandmother. She enjoyed sharing jokes, card tricks, and playing games with family and friends. She will be dearly missed. Betty is survived by her daughters Candace (and Lon) Tullar of Ankeny, Iowa; Suzanne Babcock (and Dick Boyer) of Tracy, Kellie (and Steve) Geurts of Buffalo, MN; son, Jon Erickson (and Cindy) of Marshall – nine grandchildren; Andrew Tullar, Ashlie (and Dan) VanHorn, Aaron (and Amanda) Tullar, Alexa Tullar, Kelsey (and Joe) Saxton, Jared Geurts, Justin Geurts, Morgan and Lindsey Babcock and great granddaughters Elliahana and Aaliyah Van Horn and Kattibree Tullar. Sisters are Dorothy McRae of Vancouver, WA; Delila Davis of Brookings, SD; Joyce (and Jim) Furubotten of Pasco, WA; and Jackie (and Gordy) Davis of Bovey, MN. Brother, Harry (and Lavonne) Jepsen of Flandreau, SD and many nieces and nephews. She was preceded in death by her husband, Kenneth; parents, Harry and Ann Jepsen; a brother, Bobby Jepsen; son-in-law, Al Babcock; brother-in-laws, Buehl Davis and John McRae. Blessed Be the Memory of Betty Erickson.

The family of Betty Ann Erickson created this Life Tributes page to make it easy to share your memories.

Funeral Services for Betty Ann Erickson, 85, of Marshall will...