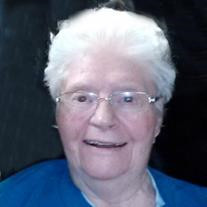 Betty Rose Friedrichs, age 89, of Marshall, Minnesota, passed away on Sunday, March 6, 2016, at Avera Morningside Heights Care Center in Marshall. A Memorial Prayer Service is 3:00 PM Saturday, March 12, 2016, at the Hamilton Funeral Home in Marshall. Interment will be at Ft. Snelling National Cemetery at a later date. Visitation will be held from 2:00 – 4:00 PM Saturday, March 12, 2016, at the Hamilton Funeral Home in Marshall. Clergy Officiating: Rev. Father Paul Wolf Congregational Hymn: “Here I Am Lord" Special Music: Newsboys ~ “We Believe” & Vince Gill ~ “Go Rest High” Bagpipes: “Amazing Grace” by Denise Lundquist Betty Rose Schonberger was born on March 15, 1926, in Rolfe, Iowa. She was the daughter of William and Elizabeth (Cox) Schonberger. Betty was baptized as an infant and confirmed in her youth in Rolfe, Iowa. The family moved to Minnesota in 1942 and Betty then graduated from Balaton High School. She went on to work at the Tyler Medical Clinic triaging patients and as a receptionist. On June 2, 1949, Betty was united in marriage to William Friedrichs at St. Dionysius Catholic Church in Tyler, Minnesota. The couple made their home in Tyler before moving to Bloomington in 1961. Betty then worked at Clancy’s Drug in Edina. Bill and Betty shared over 40 years of marriage together before he died in 1990. Betty continued to volunteer at Fairview Southdale Hospital until she moved back to Marshall in 2010. She spent a few months at Hill Street before going to Morningside Heights, where she has lived for the past 5 years. Betty’s enjoyments in life included traveling the world with her husband, walking groups and hiking, birdwatching and spending time with her siblings and nieces and nephews. Betty Friedrichs passed away peacefully on Sunday, March 6, 2016, just 9 days shy of her 90th birthday. Blessed be her memory. She will be greatly missed by her sister, Aloma Coudron of Marshall; brother, Don Schoenberger of Thermopolis, WY; special friend, Mike Sutton of Eden Prairie; nephews, nieces, other relatives and many friends. Betty is preceded in death by her parents, William and Elizabeth Schonberger; husband, William Friedrichs; sister-in-law, Alice Schoenberger; and brother-in-law, Melvin Coudron. Memorials are preferred to Prairie Home Hospice in Marshall or donor’s choice.

The family of Betty Rose Friedrichs created this Life Tributes page to make it easy to share your memories.

Send flowers to the Friedrichs family.