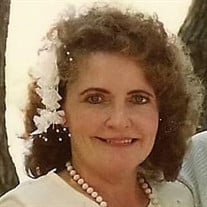 Services for Betty Johnson, 78, of Marshall, formerly of Lake Cochrane, SD, will be held at 1:00 p.m. Saturday at Christ United Presbyterian Church in Marshall. Visitation is one hour before services at the church. A reception will precede burial at the Lucan Cemetery. Betty died surrounded by her family on Tuesday, September 27, 2016, at Prairie Home Hospice in Marshall after a long battle with Alzheimer’s disease. Betty Jean Danielowski was born on May 13, 1938, at home near Lucan to Robert and Elizabeth (Henkel) Danielowski. As the youngest of a large family, she grew up adored and loved. She was baptized and confirmed in the Lutheran faith. She attended Milroy High School. She left school for marriage, but later earned her GED. Betty was joined in marriage with Eddie Smith on December 11, 1955. They made their home in Marshall and were blessed with five children: Debby, Ron, Ken, Laurae, and Sherry. On July 2, 1988, Betty was joined in marriage with Emil “Bud” Johnson. They made their home on Lake Cochrane, SD, where she enjoyed the lake life, growing beautiful flowers, and watch birds and deer in her wooded back yard. Betty enjoyed painting ceramics, intense board games, and watching NASCAR, but most of all, she loved her grandchildren. She kept them fed with homemade gingersnaps, hot chocolate, and Ho-Hos. And she kept a dresser full of swimsuits and pajamas so they could always turn a visit into an extended stay. She is survived by her children: Debby (Tom) Bringmann of Gilman, IA, Ron (Marcy) Smith of Annandale, Ken Smith of St. Cloud, Laurae (Mike) Hively of Lynd, and Sherry Smith of Gary, SD; sister-in-law Caroline Danielowski of Lamberton; grandchildren: Barbra Springer, Becca VanDam, Elizabeth Bangtson, Bonita Hummel, Dustin Smith, Corey Smith, Nikky Smith, Adam Smith, Erica Smith, Alex Smith, Jennifer Lundberg, Levi Steenhoven, and Lane McClain; 15 great-grandchildren; nieces and nephews, and first husband Eddie Smith. Betty was preceded in death by her parents; husband, Bud; brothers: Bob, Harold, and Clarence and Ervin (both lost in WWII); sisters, Leona and Verly; and grandson-in-law, Ben Hummel.

Services for Betty Johnson, 78, of Marshall, formerly of Lake Cochrane, SD, will be held at 1:00 p.m. Saturday at Christ United Presbyterian Church in Marshall. Visitation is one hour before services at the church. A reception will precede... View Obituary & Service Information

The family of Betty Jean Johnson created this Life Tributes page to make it easy to share your memories.

Services for Betty Johnson, 78, of Marshall, formerly of Lake...