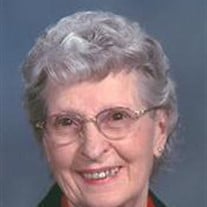 Marshall: Betty Norwood, age 83, of Marshall, passed away on Monday, June 6, 2011 at Avera Morningside Heights Center in Marshall. Funeral services will be 2:00 P.M. Monday, June 13th at Wesley United Methodist Church. Burial will be in the Marshall Cemetery. Visitation will be 4:00 P.M. to 8:00 P.M. with a 7:00 P.M. prayer service Sunday at the Hamilton Funeral Home. Visitation will continue at the church on Monday, one hour prior to the service. Betty Ann was born on January 3, 1928 in Amiret, Minnesota to Earl and Harmina (Voss) Arfmann. She was baptized and confirmed in the Methodist faith, and graduated from Marshall High School. On September 19, 1950, Betty was united in marriage to Ronald Norwood in Marshall. They farmed for two years and when Ron served in the United States Army, stationed in Panama, Betty joined him. Following Ron’s discharge from active duty, they moved back to farm near Marshall until they retired in 1990. The love of her life was her family, especially spoiling her grandchildren. Her hobbies included sewing, crocheting, gardening, baking, bowling, playing piano and having coffee with friends. Ron passed away on July 8, 2000 and Betty joined him in death on Monday, June 6, 2011. She had reached the age of 88 years, 5 months and 3 days. She is survived by her two daughters, Nancy (and Brian) Kor of Marshall and Colleen Capuzzi of Anoka; three grandchildren, Nicole Kor, Jonathon Kor and Jason Capuzzi; a sister, Vera Jueneman of Marshall; also many other relatives and friends. She was preceded in death by her parents; husband, Ron; three brothers, Bud, Len and Merl Arfmann; and two sisters, Ev Nash and Vi Corrow. Betty was a faithful member of Wesley United Methodist Church where she taught Sunday School, was active in the Wesley United Methodist Women and volunteered in the church office. Blessed Be The Memory Of Betty Ann Norwood

Marshall: Betty Norwood, age 83, of Marshall, passed away on Monday, June 6, 2011 at Avera Morningside Heights Center in Marshall. Funeral services will be 2:00 P.M. Monday, June 13th at Wesley United Methodist Church. Burial will be in the... View Obituary & Service Information

The family of Betty Ann Norwood created this Life Tributes page to make it easy to share your memories.

Marshall: Betty Norwood, age 83, of Marshall, passed away on...

Send flowers to the Norwood family.