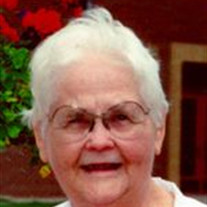 Betty J. Simmons, age 87, of Marshall, passed away Friday, February 19, 2010 at the Mankato Hospital. Funeral services will be 11:00 A.M. Tuesday, February 23, 2010 at Wesley United Methodist Church. Burial will be in the Marshall Cemetery. Visitation will be one hour prior to the service at the church on Tuesday. The Hamilton Funeral Home is in charge of the arrangements. Betty Jane Simmons was born to Sidney and Beryl (Bravender) Lovrien on May 21, 1922 in Bradgate, Iowa. She was baptized in the Christian faith. At the age of five, Betty and her family moved to Long Beach, California. In 1935 they moved to the farm south of Milroy. She graduated from the Milroy High School in 1941 and went on to business school in Minneapolis. In 1942 she joined the Army Air Corps and worked in Ogden, Utah and Portland, Oregon as a telephone and teletype operator until the war ended. On September 7, 1946, Betty was united in marriage to Robert Simmons in Vancouver, Washington. They moved to the family farm in Clifton Township and raised her family. Due to an injury that Betty received in 2004, she and Bob entered assisted living in Springfield. Bob died December 6, 2009. Betty passed away Friday, February 19, 2010 at the Mankato Hospital. She had reached the age of 87 years, 8 months and 26 days. She is survived by her three children, Roberta (William) Borchert of Shoreview, Steve and (Carol) Simmons of Marshall and Jane (Paul) Nuytten of Sleepy Eye. Ten grandchildren, Laura (Snoppy) Platz, Matthew (Bobbie) Nuytten, Marcy Nuytten, Julie (Tony) Steffen, Molly (Mike) Boston, Michelle Simmons, Stacy (Dennis ) Mamer, Bon (Shannon) Hill-Simmons, Charron (Eric) Remme and Kathy (Brent) Knapper; fifteen great grandchildren; two brothers, Dean (Mae) Lovrien and Richard (Laurie) Lovrien of Salem, Oregon; two sisters, Patricia (Allen) Brakke of Sommerset, WI and Phyllis (Norman) Rissinen of International Falls; sister-in-law, Arlene Lovrien of Troutdale, Oregon; also many other relatives and friends. She was preceded in death by her parents, husband, Bob; and a brother, James Lovrien. The love of Betty’s life was her family and doing things with and for them. Other enjoyments included the outdoors from gardening to watching the butterflies and birds. Betty was a faithful member of the Wesley United Church where she was very active until her health declined. Bless be the memory of Betty J. Simmons

The family of Betty Jane Simmons created this Life Tributes page to make it easy to share your memories.

Send flowers to the Simmons family.