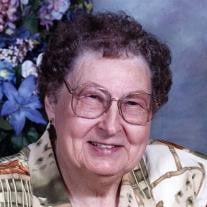 The Funeral Service will be held at 11:00 a.m. Friday, June 30, 2017, at Cornerstone United Methodist Church in Marshall. Interment will follow in Lakeside Cemetery, Balaton. Visitation will be held from 5:00 – 8:00 p.m. Thursday, June 29, 2017, at the Hamilton Funeral Home in Marshall. A Prayer Service is scheduled for 7:00 p.m. Visitation will be one hour prior to the service, from 10:00 – 11:00 a.m., on Friday at the church. Beulah Mercedes Strandberg was born on November 15, 1923, to parents Albin and Ethel (Gorman) Strandberg in Harcourt, IA. She was baptized and confirmed in the Christian faith. Her family lived in multiple locations in the Butterfield, St. James and Oden, Minnesota communities. At sixteen years old she started working for William and Mary Lavoie, of rural Balaton. Three years later she married Harlin on September 27, 1942 in Arco, Minnesota. She was a loving homemaker and devoted wife. The couple raised five children. Harlin passed away unexpectedly in 1974. Beulah was united in marriage to Kenneth Lavoie on November 5, 1985 in Brookings, South Dakota. The couple made their home in Marshall. Kenneth passed away in June of 1999. Beulah was a dedicated member of the Methodist Church. She taught Sunday school and served on the ladies aid. She was also a very active volunteer with the Marshall food shelf, receiving more than one United States Presidential award. Beulah’s other interests and hobbies, included flower gardening, embroidering, playing cards, crossword puzzles, dancing and baking. She enjoyed visiting with family and friends. She was known for her love of family and generous hugs. Beulah Lavoie went to her heavenly home on Wednesday, June 21, 2017, at the age of 93 years, 7 months, and 6 days. Blessed be her memory. Beulah is survived by her five children, Raymond (Joan) Lavoie of Marshall, Larry (Pat) Lavoie, of Tracy, Steve (Pat) Lavoie of River Falls, WI, Luann (Mike) Johnson of Balaton, Loren Lavoie of Marshall; 16 grandchildren; 17 great grandchildren; two great-great grandchildren; brothers, John Strandberg of Marshall, Frank (Joyce) Strandberg of Elgin, Il.; brother-in-law Joe Tschoerner of Bartlett, TX; nephews, nieces, other relatives and many friends. Beulah is preceded in death by her parents, Albin and Ethel Strandberg; husbands, Harlin and Kenneth; two grandsons, William Livingston and Weston Lavoie; and three siblings, Bert, Rosa and Wanda.

The Funeral Service will be held at 11:00 a.m. Friday, June 30, 2017, at Cornerstone United Methodist Church in Marshall. Interment will follow in Lakeside Cemetery, Balaton. Visitation will be held from 5:00 &#8211; 8:00 p.m. Thursday, June... View Obituary & Service Information

The family of Beulah Mercedes Lavoie created this Life Tributes page to make it easy to share your memories.