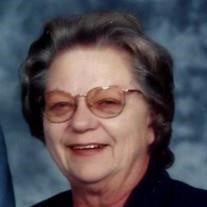 Beverley Jean Evans, age 77, of Balaton, passed away peacefully on Wednesday, September 2, 2015, at the Avera McKennan Hospital in Sioux Falls, South Dakota. Funeral Services are 11:00 AM Saturday, September 12, 2015, at Grace First Parish in Russell. Interment will be in the Russell Cemetery. Visitation will be from 4:00 – 8:00 PM Friday, September 11, 2015 at the Hamilton Funeral Home in Marshall. A prayer service is scheduled for 7:00 PM. Visitation will continue one hour prior to the service, from 10:00 – 11:00 AM, on Saturday at the church. Clergy Officiating: Rev. Steve Quist Organist: Sandy Buesing Congregational Hymns: “Amazing Grace” Special Music: Sara DeGroat, Soloist ~ “In The Garden” Active Casket Bearers: Colin Evans, Derek Evans, Colton Evans, Austin Clayton, Colby Buchert, Todd Kramer Honorary Casket Bearers: Gary & Colleen Buchert, Kari Buchert, Jim Burns, Jan & Tom Rustand, Tom Eisfeld Beverley Jean Evans was born on March 27, 1938, on the farm in Stanley Township, Lyon County, Minnesota. She was the daughter of Walter and Della (Broesder) Kramer. Bev was baptized as an infant and was confirmed at the Federated Church in Marshall. She attended country school through 6th grade where she enjoyed helping the other students. She knew from a very early age that she wanted to be a teacher. She then attended Marshall High School where she was very active in FHA, serving on the regional, state, and then national level. She graduated as valedictorian with the class of 1956. Bev went on to earn her Home Economics Education degree from the University of Minnesota, later achieving her Master’s Degree in Education Administration. On July 9, 1959, Bev was united in marriage to Dale Evans at the Federated Church in Marshall. The couple lived in Rock Lake Township where they raised two children, Kim and Corey, and spent over 49 years of marriage together before Dale died in March of 2009. 4-H was a major priority in Bev’s life as a child and she carried on that tradition with her children and grandchildren. She served as a leader and judge for many years. Bev was a teacher in Russell for over 30 years before serving another 8 years as Dean of Students. Even after she officially retired in 1999, she continued in other areas of education, using her gift of teaching for over 50 years. Her dedication and commitment to education carried on through so many individuals who she influenced throughout those years. Bev was a member of Grace First Parish in Russell. Bev’s other enjoyments in life included raising sheep, sewing, crafts and gardening. She was most passionate about spending time with her family, especially her four grandsons. Bev entered her heavenly home on Wednesday, September 2, 2015 at the age of 77 years, 5 months, and 6 days. Blessed be her memory. Grateful for having shared her life, are her son, Corey (and Jennifer) Evans of Balaton; son-in-law, Mike Clayton of Alexandria; 4 grandchildren, Colin Evans of Corsica, SD, Derek Evans of Mitchell, SD, Colton Evans of Balaton, Austin Clayton of Alexandria; brother, Calvin (and Rhonda) Kramer of Marshall; nephews, nieces, other relatives and many friends. Beverley is preceded in death by her parents, Walter and Della Kramer; husband, Dale Evans; daughter, Kim Clayton; infant daughter, Michelle Evans; and brother, Don Kramer. Memorials preferred to the American Cancer Society. The family invites attendees to the church basement for a luncheon following the service.

The family of Beverley Jean Evans created this Life Tributes page to make it easy to share your memories.

Send flowers to the Evans family.