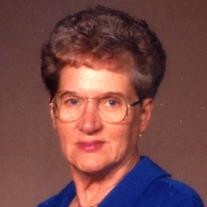 Beverly Butman, age 94, of Marshall, Minnesota, died on Tuesday, February 12, 2019, at the Avera Marshall Regional Medical Center in Marshall, Minnesota. Memorial Services will be at 2:00 p.m. Saturday, June 29, 2019, at the Hamilton Funeral Home in Marshall, Minnesota. Interment will follow in the New Woodlawn Cemetery in Pipestone, Minnesota. Visitation will be held two hours prior to the service, from Noon – 2:00 p.m., on Saturday at the Hamilton Funeral Home in Marshall. Beverly Jean McKinney was born on October 31, 1924, to John and Sadie (Leonard) McKinney in Appleton, Minnesota. She grew up in Appleton before her family moved to Montevideo. There she attended Montevideo high School graduating in 1942. Beverly went on to work for Pipestone County Extension Office with the 4-H program. On December 13, 1946, Beverly was united in marriage to Kenneth Butman at Grace Episcopal Church in Montevideo. They made their home in Pipestone before moving to Glencoe in 1966 and then Buffalo in 1970. Following Kenneth’s death in 1974, Beverly moved to Montevideo in 1974, Glenwood in 1988, and finally settling in Marshall in 2006. She worked for many years as a financial and social worker for the county, retiring in 1989. Bev was extremely active in the VFW Auxiliary, working her way through all the district and state chairs and then serving as state auxiliary president in 1989-90. She was also proud to be Executive Director of the Minnesota Angus Association and was a foster grandparent in Glenwood. She was an active volunteer at the St. Cloud VA Hospital for years and volunteered at the Avera Thrift Store when she moved to Marshall. Bev had an avid and life-long interest in our democratic system and was an election judge for over 40 years. Bev and her daughter Deb travelled throughout the US presenting a program called Uncle Sam and Andie about the importance of patriotism and The Pledge of Allegiance. This program has been presented to over 80,000 school children and Veterans and was very near and dear to Bev’s (and Deb’s) hearts! Bev was a very independent, determined, and giving soul. She lived a long full life that was filled with family togetherness, enjoying life, helping others, and being active serving Veterans. She could always be depended on to have a story to tell, an opinion to give, or an idea to be developed. Her determination to help others and carry on even when life got tough is a trait wholeheartedly present in the spirits of her entire family. She will be proud that a piece of her value system will live on in the hearts and daily actions of all those that love her deeply! Being a Great Gramma meant keeping up with technology, so besides playing games on her phone, Bev ‘mastered’ texting, Facebook, and using FaceTime to stay connected with her family. Sometimes she made everyone smile with her interesting posts. Her other enjoyments in life included time spent outdoors with her flowers, volunteering, socializing at the senior center, playing cards – especially with family, crossword puzzles, playing Bingo, gardening, reading, going to the casino, and coin collecting. Her other two loves were traveling and spending time at the lake cabin. She followed any sporting events that featured her great-grandchildren’s events, the Marshall Tigers, Minnesota Gophers or Vikings. She cherished time spent with her family – particularly the grandchildren and great-grandchildren – and her dogs, Atticus and Charlie. Beverly Butman died on February 12, 2019, in Marshall, Minnesota, at the age of 94 years, 3 months, and 12 days. She had an amazing 94 years in this world. Blessed be her memory. Bev is survived by her 3 children, Rita (Gary) Smidt of Marshall, Mark (Debbie) Butman of Westminster, CO, Deb (Clark) Butman-Perkins of Brookings, SD; daughter-in-law, Brenda Butman of New Harmony, IN; 5 grandchildren, Jeffrey (Malissa) Smidt of Marshall, Michele Smidt of Marshall, Amy Butman (Jason Smith) of Lochbuie, CO, Nathan Butman of Westminster, CO, Whitney (Matt) Hines of Charleston, SC; 9 great-grandchildren, Lucas Smidt, Hunter Smidt, Caiden Smidt, Cameron Butman, Max Hines, Eli Hines, Ashlyn Craddock, Kelsey Smith, Brayden Smith; nieces, nephews, other relatives and many friends. Preceding her in death were her parents; husband, Kenneth; and son, Steve Butman. In keeping with Beverly’s patriotism and dedication to veterans, her family would very much appreciate casual dress in a red, white, and blue theme.

The family of Beverly Jean Butman created this Life Tributes page to make it easy to share your memories.

Send flowers to the Butman family.