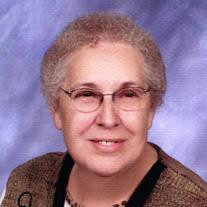 Beverly Heim, age 83, of Marshall, Minnesota, passed away on Friday, January 5, 2018, at the Minneota Manor Care Center. Memorial Services are 11:00 a.m. Saturday, January 13, 2018, at First Lutheran Church in Marshall. Interment will follow in the Marshall Cemetery. Visitation will be held one hour prior to the service, from 10:00 – 11:00 a.m., Saturday at the church. Beverly “Bev” Beatrice Tammeus was born on February 17, 1934 in rural Nobles County, Minnesota. She was born to parents, John and Annie (Yantzi) Tammeus. Beverly was baptized as an infant and later confirmed in her youth at the Emmanuel Lutheran (Pfingsten) Church near Fulda, Minnesota. She grew up near Fulda, attended country school and graduated from Fulda High School with the class of 1952. After high school, Beverly started working at Nobles County Coop Electric in Worthington where she met her husband, Eberhard “Ed” Heim. Beverly and Ed were united in marriage on August 4, 1956, at her home parish near Fulda. The couple made their home in Marshall. Beverly began her long career as a bookkeeper shortly thereafter. She also owned and managed apartment complexes. Beverly retired from bookkeeping around 1990 and sold her last apartment complex just 18 months ago. Beverly and Ed shared over 47 years of marriage together and raised 3 children: Nancy, Deborah, and Walter. Beverly was a member of First Lutheran Church in Marshall and she was very active in bowling leagues along with her husband, Ed. She worked diligently and without complaint in all aspects of her life and also had a clever and intelligent sense of humor. Beverly lived her life with order and intentionality. Family time was her top priority and she never turned down a family trip to Dairy Queen, particularly if such trip was suggested by one of her grandchildren and even if it was the second time she was treating everyone to ice cream that day. Beverly died on January 5, 2018, at the age of 83 years, 10 months, and 19 days. She will be dearly missed. Beverly is survived by her children, Nancy (and John) Smigal of Escondido, CA, Deborah (and Leon) Doom of Cottonwood, Walter (and LeAnn) Heim of Big Lake; 5 grandchildren, Mari Smigal, Alex Smigal, Kendall (Dana Haberman) Doom, Camille Doom, Winston Doom; great-grandson, Oskar Haberman Doom; siblings, Margaret (and Charles) Nelson of Slayton, Vera Mae Peddycourt of Watertown, SD, Dorothy Gustafson of Andover, Marilyn Brink of Sioux Falls, SD; nephews, nieces, other relatives and many friends. Beverly is preceded in death by her parents, John and Annie Tammeus; husband, Ed Heim; brother, John Tammeus Jr; brothers-in-law, Raymond Peddycourt, Michael Gustafson, and John Brink.

The family of Beverly "Bev" Heim created this Life Tributes page to make it easy to share your memories.

Beverly Heim, age 83, of Marshall, Minnesota, passed away on...

Send flowers to the Heim family.