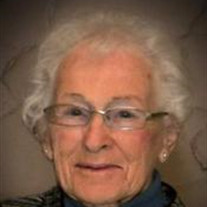 Balaton: Beverly Y. Manguson, age 88, of Balaton, passed away at Colonial Manor Care Center on Wednesday, April 17, 2013. Memorial service will be 10:30 A.M. Monday, April 22nd at Balaton United Methodist Church. Visitation will be 2:00 P.M. to 6:00 P.M. with a 5:30 P.M. prayer service Sunday at the church. Visitation will continue at the church on Monday, one hour prior to the service. Burial will be in the Lakeside Cemetery. Beverly Yvonne was born September 6, 1924 to Heinrich Friederick Wilhelm Meyer and Ernestina Wilhelmine Fredricka (Katzung) in Eureka, South Dakota. She was baptized at Zion American Lutheran Church in Eureka on May 18, 1925. During the Depression her family moved from Eureka to Marshall, Minnesota. She was confirmed at Christ Evangelical Lutheran Church on April 2, 1939. She graduated from Marshall High School class of 43. While roller skating she met Allen Manguson. They were united in marriage on November 29, 1945. In the fall of 1946 they moved to their farm north of Balaton, Minnesota by Lake Yankton where they resided until October, 1999. They then moved to Balaton where she continued to live after Allen’s passing. In the fall of 2012 she became a resident of Colonial Manor where she passed away on April 17, 2013. Beverly wore many hats throughout her life; first as a farmwife and mother, babysitter, librarian, member of the United Methodist Church, Ladies Aid and Eastern Star. She sewed many clothes, canned many vegetables, crocheted, knitted, and counted cross stitch pictures. Could she bake! Grandma Bars, cheese spread, cut out cookies, Belgium cookies, steam pudding were among her specialties. She loved her family and especially enjoyed time with her five grandchildren. Many a trip were made to Alexandria, Minnesota for family vacations where they would take us fishing. She was especially proud of her three Eagle Scout grandsons. Traveling to Wisconsin was also a trip she looked forward to. Beverly is survived by daughters, Julie and Garry Lokken of Balaton, Minnesota, Janet and Steve Erkes of Waukesha, Wisconsin, five grandchildren, Moriah, Aaron, Ryan, Reed and Rebekah, nieces, nephews and cousins. She was preceded in death by Allen, two infant daughters Nancy and Susen, parents and siblings. Blessed be the memory of Bev Manguson.

The family of Beverly Yvonne Manguson created this Life Tributes page to make it easy to share your memories.

Send flowers to the Manguson family.