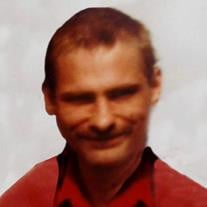 William “Bill” Connelly, age 44, of Marshall and formerly of Tracy, Minnesota, passed away on Saturday, June 3, 2017, at the Pipestone County Medical Center in Pipestone, Minnesota. Memorial services are 2:00 p.m., Friday, June 9, 2017, at the Hamilton Funeral Home in Marshall. Interment will follow in the Marshall Cemetery. Visitation will be held one hour prior to the service, from 1:00 – 2:00 p.m., on Friday again the Hamilton Funeral Home. William John Connelly was born on June 26, 1972 in Marshall, Minnesota. He was the son of Christian and Genevieve (Frietag) Connelly. He was baptized as an infant and confirmed in his youth at First Lutheran Church in Marshall. Bill attended Marshall Public Schools and then attended High School in Marshall, Florida, and Mankato where he graduated in 1990. Bill lived in Tracy for the next 22 years, working odd jobs and helping many people in his life. He was a handyman and enjoyed assisting others with his “fix-it” talents. Bill enjoyed a good joke and spending time with those that knew him best. He moved to Marshall about 5 years ago and recently was living with his brother in Pipestone. Bill passed away on Saturday, June 3, 2017, in Pipestone, Minnesota, just 23 days before his 45th birthday. Bill is survived by his siblings, Susan (and Eugene) Stripling of Cottonwood, Judy Williams (and Carlos Washington) of Pipestone, Mary Connelly (and Wayne Nehring) of Boyd, Gary Connelly of Pipestone; sisters-in-law, Deb Connelly of St. Paul, Sara Connelly (and Tim DeVries) od Marshall; 14 nieces and nephews; 3 step-nieces and nephews; other relatives and friends. He was preceded in death by his parents, Christian and Genevieve Connelly; girlfriend, Sharon; brothers, Don and David Connelly; and niece, Jade Stripling. Blessed be his memory.

The family of Bill John Connelly created this Life Tributes page to make it easy to share your memories.

William “Bill” Connelly, age 44, of Marshall and formerly of...

Send flowers to the Connelly family.