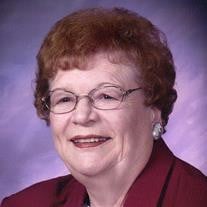 Bonita Belle Peterson was born May 31, 1929, to Marlin “Red” and Beatrice (McDaniel) Paterson in Balaton, Minnesota. She was baptized and confirmed in the Methodist Church and graduated from Balaton High School with the class of 1947. Bonnie then attended beauty school in Mankato before returning to Balaton to work in the local café. On July 15, 1955, Bonnie was united to marriage to Vernon “Bud” Weidauer. The couple made their home in Balaton while Bonnie worked as a school secretary. They were proud members of Trinity Lutheran Church where Bonnie served on the church council for many years. The couple enjoyed camping, traveling to Arizona and occasionally Las Vegas. She and Bud shared over 46 years of marriage together before his death in 2001. Bonnie inherited her strength and generous spirit from her mother. She always had a very giving nature and looked after the community children as if they were her own. She had a special place for animals, especially her pet cocker-Ginger. An avid Minnesota Twins fan, Bonnie spent countless hours following her favorite team. Above all, she cherished her faith and her church which fostered so many enduring friendships. Bonita Weidauer died on February 2, 2019, in Sioux Falls, South Dakota. She reached the age of 89 years, 8 months, and 2 days. She is survived by cousins, nieces, nephews, and those who cared for her. They include Ronnie Almjeld, Ron & Marcia McDaniel, Dean McDaniel, and Nyla Nordvick. Also, special friends: Jerry & Beth Terhark, Kent Henkel, Kevin Henkel, and Orlin Lustfield. Bonnie is preceded in death by her parents; husband, Vernon “Bud” Weidauer; son, Dwight; and dear friend, Murlaine Henkel.

Bonita Belle Peterson was born May 31, 1929, to Marlin &#8220;Red&#8221; and Beatrice (McDaniel) Paterson in Balaton, Minnesota. She was baptized and confirmed in the Methodist Church and graduated from Balaton High School with the class of... View Obituary & Service Information

The family of Bonita "Bonnie" Weidauer created this Life Tributes page to make it easy to share your memories.

Send flowers to the Weidauer family.