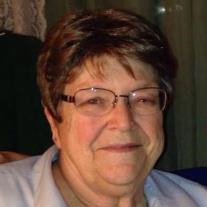 Bonnie Lou Knutson, age 77, of Cottonwood, Minnesota, passed away on Tuesday, December 8, 2015, at the Avera Dougherty Hospice House in Sioux Falls, South Dakota. Memorial services are at 10:00 AM, Saturday, December 12, 2015, at Christ Lutheran Church in Cottonwood. Interment will be in the church cemetery. Visitation will be held one hour prior to the service, from 9:00-10:00 AM, on Saturday at the church. Clergy Officiating: Rev. Jim Demke Organist: Rosie Sorum Congregational Hymns: How Great Thou Art, Go Tell It On The Mountain, Hark, The Herald Angel Sing Honorary Urn Bearers: Kristopher Knutson, Jonathon Knutson, Jacob Knutson, Megan Knutson, Toby Knutson Bonnie Lou Rickard was born on February 13, 1938, in El Dorado, Kansas. She was the daughter of Randal and Marguerite (Purdy) Rickard. Bonnie moved around with her family as a girl. While in Texas, She graduated from San Jacinto High School and then attended the University of Houston. On July 28, 1957, Bonnie was united in marriage to Gordon Knutson at Christ Lutheran Church in Cottonwood, Minnesota. This was the first union in the new church. The couple made their home in Cottonwood and raised three sons, Brian, Steve, and Brett. The couple shared over 46 years of marriage prior to Gordon’s death on October 16, 2003. In addition to being a loving homemaker, Bonnie worked part-time in Cottonwood at the golf course, grocery store, and Village Court. She was known for her lefse and Christmas cookies. Bonnie was a long-time member of Christ Lutheran Church in Cottonwood where she served with the WELCA. Other enjoyments in life included painting, ceramics, playing cards, bowling, golf, camping, fishing, and spending time at the lake. Bonnie passed away on Tuesday, December 8, 2015 at the age of 77 years, 9 months, and 26 days. Blessed be her memory. Bonnie is survived by her 3 sons, Brian (and Kathy) Knutson of Cottonwood, Steve (and Sandy) Knutson of Marshall, Brett (and Sarah) Knutson of Sioux Falls, SD; 5 grandchildren, Kristopher Knutson (and Chue Vang) of Maplewood, Jonathon (and Melissa) Knutson of Ironton, Jacob Knutson of Lake Benton, Megan Knutson of Green Valley, Toby Knutson of Sioux Falls, SD; 2 great-grandchildren, Jayden and Clayton Knutson; sisters, Betty Lovsness of Cottonwood, Joyce (and Doug) Warnke of Cottonwood; sister-in-law, Jean Rickard of Marshall; nieces, nephews, and other relatives and many friends. She was preceded in death by her parents, Randal and Marguerite Rickard; husband, Gordon Knutson; brother, Randal Rickard; and brother-in-law, Reed Lovsness. The family invites attendees to the church basement following the service for a luncheon.

The family of Bonnie Lou Knutson created this Life Tributes page to make it easy to share your memories.

Send flowers to the Knutson family.