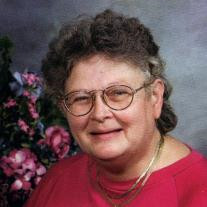 Bonnie Kotval, age 80, of Marshall, Minnesota, passed away peacefully on Sunday, August 27, 2017, at Morningside Heights Care Center in Marshall, Minnesota. Memorial Services and Visitation are pending due to a family illness and will be held at a later date. More information to come as it is available... Bonnie Mae Verhaake was born on December 22, 1936, in Marshall, Minnesota, the daughter of Henry and Evelyn (Javens) Verhaake. Bonnie was baptized as an infant and confirmed in her youth in the Christian faith. She attended school in Marshall, graduating with the Marshall High School class of 1954. On June 26, 1955, Bonnie was united in marriage to Kenneth Allen Kotval at Trinity Lutheran Church in Lucan. The couple made their home and farmed outside Vesta while raising three children: Marlys, Bruce, and Tammy. After the couple separated in 1974, Bonnie moved to Marshall. Bonnie worked in the Lyon County Library, Lynd School Library, History Center, and at Radio Shack in Marshall. She was a member of the Non-Traditional Student Organization while she attended Southwest Statue University from 1981 – 1984. Bonnie also served as choir member and treasurer at Christ United Presbyterian Church in Marshall. Her enjoyments in life included playing solitaire, watching TV, babysitting her grandson, and playing bingo. Bonnie passed away on August 27, 2017, at the age of 80 years, 8 months, and 5 days. Blessed be her memory. Bonnie is survived by her children, Marlys (and Curt) Carpenter of Marshall, Bruce Kotval of Shoreview, Tammy Rozell of Marshall; grandson, Christopher Carpenter of Marshall; sister, Joyce Paulson of Marshall; niece, LaVae Anderson of Marshall; other relatives and friends. Bonnie is preceded in death by her parents, Henry and Evelyn Verhaake; father of her children, Kenneth Kotval; and nephew, Jarrod Paulson.

Bonnie Kotval, age 80, of Marshall, Minnesota, passed away peacefully on Sunday, August 27, 2017, at Morningside Heights Care Center in Marshall, Minnesota. Memorial Services and Visitation are pending due to a family illness and will be held... View Obituary & Service Information

The family of Bonnie Mae Kotval created this Life Tributes page to make it easy to share your memories.

Send flowers to the Kotval family.