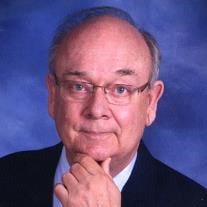 Calvin Barnett, age 77, of Marshall, Minnesota, passed away peacefully on Wednesday, January 29, 2020, at the Avera Morningside Heights Care Center in Marshall, Minnesota. His death came just weeks after being diagnosed with an aggressive form of cancer. Memorial Services are 11:00 a.m. Saturday, February 22, 2020, at the Cornerstone United Methodist Church in Marshall, Minnesota. Masonic Services will follow and then a reception will be held in the church basement. Private Interment will be at a later date in the Rose Hill Cemetery in Greene, Iowa. Visitation will be held one hour prior to the service on Saturday, February 22, 2020, from 10:00 – 11:00 a.m., at the Cornerstone United Methodist Church in Marshall. Calvin was born in 1942 in Greene, Iowa, to Dean and Vera (Eichmeier) Barnett. He grew up in nearby Rockford, Iowa, after his father died in an accident soon after his birth. Calvin treasured the special love and care of his mother who raised him with the help of his grandparents. Calvin received an Economics degree from Mankato State University and managed lumber yards in Rockford and Mankato, Minnesota, before relocating to Marshall in 1971. He served as Marshall’s City Assessor for 38 years before retiring in 2008. He also served the roles of Purchasing Agent and Economic Development Director, leaving a lasting community impact through many initiatives related to Schwan’s, MCP, US Bank, and more. In retirement, he remained active in organizations such as his townhome association, YMCA, and the Masons where he was a member for over 50 years. Calvin had a passion for the outdoors that he shared with his friends and family. He was an avid hunter and angler with a deep knowledge of firearms, which he enjoyed collecting and shooting at the area sportsman's club. He also loved driving country roads to observe wildlife on area wetlands and fields as well as collecting wildlife art. His generous and compassionate spirit led him to support several local and national charities. He's survived by two sons, Jason (Rachel) Barnett of Lakeville and Chris (Diane) Barnett of St. Louis Park; grandson, Quinn Barnett, of the Twin Cities; other relatives and many friends. He’s remembered as a loving father, leaving many simple but treasured memories like walking fields for pheasants, going fishing, and playing catch in the yard.

The family of Calvin Dean Barnett created this Life Tributes page to make it easy to share your memories.

Send flowers to the Barnett family.