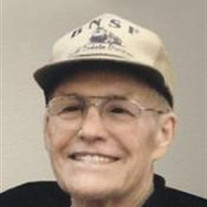 Russell: Calvin Cadwell, age 77, of Russell, passed away at the Prairie Home Hospice House on Wednesday, October 12, 2011. Funeral services will be 11:00 A.M. Saturday, October 15th at the Grace First Parish. Burial will be in the Russell City Cemetery. Visitation will be 4:00 P.M. to 8:00 P.M. with a 7:00 P.M. prayer service Friday at the Hamilton Funeral Home. Visitation will continue at the church on Saturday, one hour prior to the service on Saturday. Calvin was born in Russell, on January 16, 1934; the ninth child of Ross W. and Nellie Grace (Rask) Cadwell. He was born and raised on a farm on the eastern edge of Russell. It was here that he developed his love of the outdoors and farming. He attended Russell Public School. On March 23, 1952, he was united in marriage to Shirley Hurst at the First Presbyterian Church of Russell. They resided briefly in Marshall and soon returned to rural Russell where they farmed. In 1963 they purchased the farm that became home to them and their five children. In 1986, Calvin and Shirley moved into Russell. Calvin loved his family and enjoyed spending time with all of them, especially his beloved wife, Shirley. His devotion was manifested in the loving care he showered upon her. His gift was service and he obtained his greatest satisfaction when he could be serving someone. He was an active church member. He was an elder and served on many committees and assisted with building improvements. He loved making things and was always busy planning and building a new project. Calvin’s occupations were carpenter, custodian, and most of all, farmer. His hobbies included coin collecting, bird watching, woodworking, gardening, and cheering for the Minnesota Twins and Vikings. Surrounded by his loved ones on October 12, 2011, Calvin Ray Cadwell was ushered into the presence of Jesus while at the Prairie Home Hospice in Marshall. He had reached the age of 77 years, 8 months and 27 days. Calvin is survived by his wife, Shirley, of Russell; four daughters, Terrie (Robert) Stanford, of Valley Springs S.D.; Lavonne Johnson, of Tracy; Kathy Jacobson, of Anoka; Brenda (Scott) Johnson, of Russell; one son, Todd (Lynn) of Spicer; 15 grandchildren; 10 great grandchildren; brothers, Robert, of Columbia Heights; Merlyn (Marge), of Clara City; Arthur (Muriel) of Marshall; and many other relatives and friends. He was preceded in death by his parents; three sisters; two brothers; and infant son, Russell. Blessed be the memory of Calvin Cadwell.

Russell: Calvin Cadwell, age 77, of Russell, passed away at the Prairie Home Hospice House on Wednesday, October 12, 2011. Funeral services will be 11:00 A.M. Saturday, October 15th at the Grace First Parish. Burial will be in the Russell City... View Obituary & Service Information

The family of Calvin Ray Cadwell created this Life Tributes page to make it easy to share your memories.

Russell: Calvin Cadwell, age 77, of Russell, passed away at the...

Send flowers to the Cadwell family.