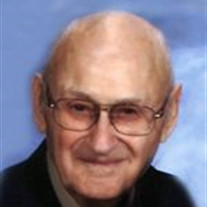 Calvin L. Kline, age 84, of Marshall, passed away at the Prince Of Peace Hospice House in Sioux Falls on Monday, November 23, 2009. Funeral services will be 10:30 A.M. Saturday, November 28, 2009 at Wesley United Methodist Church. Visitation will be 4:00 P.M. to 8:00 P.M. with a 7:00 P.M. prayer service Friday at the Hamilton Funeral Home. Visitation will continue at the church on Saturday, one hour prior to the service. Calvin Lamont Kline was born February 25, 1925 to Jay and Anna (Gerbers) Kline in Audubon County, Iowa. On January 2, 1946, he was married to Mildred M. Pierce. They lived on a farm in Audubon County for six years. In 1951, they moved to Ottumwa, IA, where he was employed by Sutherland Lumber Company. In 1954 he was transferred to Sioux Falls, SD where he helped build and stock a new lumber yard for Sutherland Lumber. While there, he was offered a job with Morrell’s to open a new hog buying station in Marshall, MN. In the spring of 1957, the family moved to Marshall. Calvin was baptized into the Disciples of Christ Church. He was an active member of Wesley United Methodist Church, serving on several boards over the years, and spending many hours working on the church addition. He was also there to help with 4-H activities, the Boy Scout program, and hospice. The lumber business stayed with him, and as part time job and hobby, he became interested in building or remodeling houses. Over the years, he built one new house in Sioux Falls and seven new houses in Marshall, and remodeled two older ones, doing most of the inside finish work himself. When he retired in 1986, his wood working shop in the basement took most of his time. The family did a lot of craft working, going to many craft sales on weekends, which turned into a full time framing business. He also enjoyed playing bridge and learned to play cards on the computer. He enjoyed traveling throughout the United States and Canada with his family, first with a tent, then fold-out camper. In later years, he took his fifth wheel camper to Alaska. One summer was spent working part-time at Wendy’s in Branson where your pay stub was the same as a ticket to any and all shows. (Very Thrifty!) Later he headed south for winters in Texas and Arizona. While in Texas, his enjoyment was square dancing. The last few winters were spend in his condo in Sun City, AZ. Even there, he stayed busy with volunteer work at the Boswell Hospital. He is survived by is wife, Mildred of Marshall; two daughters, Joan Chadwick of Sioux Falls, SD and Janice Baltzer of Phoenix, AZ; one son, Jeffrey Kline (wife, Donna) of St. Louis, MO; six grandchildren, Ryan Chadwick (wife, Jana), Matthew Baltzer, Lindsay Jo Baltzer, Jessie Kline, Claire Kline, and Annie Kline; great granddaughter, Elizabeth Chadwick; a sister-in-law, Thelma Kline; also many other relatives and friends. He was preceded in death by his parents; two brothers, Lloyd and Lowell; and sister-in-law, Erma Kline Please designate memorials to Wesley United Methodist Church or Hospice

The family of Calvin Lamont Kline created this Life Tributes page to make it easy to share your memories.

Send flowers to the Kline family.