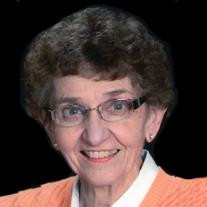 Longtime teacher Carlene Otterson, 79, of Marshall died Friday, Feb. 3, 2017, at Avera McKennan Hospital and University Medical Center in Sioux Falls, S.D., from a brain hemorrhage suffered earlier in the week. Funeral services are scheduled at 10:30 a.m. Wednesday, Feb. 8, at St. Stephen Lutheran Church in Marshall with burial at a later date. Visitation will be held 4-7 p.m. Tuesday, Feb. 7, at Hamilton Funeral Home in Marshall with occasional background music from the grandchildren. Carlene Louise Grewe was born March 17, 1937, to Edwin and Irene (Luehring) Grewe at their farm in Moltke Township, Sibley County, Minnesota, joining a close-knit clan of people north of Gibbon who celebrated their German heritage every day. She was baptized and later confirmed at St. Peter’s Lutheran Church of Moltke Township. She was raised on the family farm with her two younger sisters at a time when all the neighbors were members of the same family trees. Carlene told stories of half-mile summer walks through the fields to the south to visit her grandmother, Louisa Grewe, on the homestead. These midday conversations spawned lifelong affinities for root beer and baking. She completed her education through the eighth grade at St. Peter’s Lutheran School in Moltke Township, then joined the Gibbon High School class of 1955. She played cornet in the high school band and kept friendships for life with her band peers and classmates. She was a leader in organizing class reunions and had recently made reservations for the class of 1955 to gather for an informal lunch later in the spring. Carlene earned her bachelor’s degree in business education from then-Mankato State College in 1958, attending classes year-round and completing her degree in three years. She started her career at Danube High School as a student teacher and took her first full-time position at Hutchinson. She married Donald E. Otterson on July 8, 1961, at St. Peter’s Lutheran Church. They met in a summer school class — Art, Metal and Jewelry — at Mankato State where she was finishing electives and he was accumulating credits after transferring from Iowa State College of Agricultural and Mechanic Arts (today’s Iowa State University). Don was sent by the U.S. Army to Germany in 1959 for about 18 months. After Carlene visited his parents in Winnebago, Minn., he proposed by letter from Germany, and she accepted by letter in reply. They were married about six weeks after his discharge. The couple lived in Mankato after their marriage while Don finished his degree in industrial arts. They moved to Marshall for his student teaching, then to Redwood Falls for three years. They returned to Marshall in August 1968. Carlene also taught at high schools in Jeffers, Minneota, Morton and Russell before accepting a permanent position in business education at Marshall in 1971, primarily teaching typing and some shorthand. She was the Marshall-area civil service examiner for about 30 years, proctoring state tests two Saturday mornings each month in a high school classroom. She helped colleagues for many years with student clubs and organizations such as Office Education Association (today’s Business Professionals of America) and the Distributive Education Clubs of America. A notorious night owl, she graded thousands of typing assignments each year at the kitchen table while watching “The Tonight Show” with Johnny Carson. Carlene completed a master of education degree through St. Mary’s University of Minnesota in 1994. She retired in 1999 as a language arts teacher at Marshall Middle School. Her grandson Matt was in the same building for her final two years of teaching. Her learning continued through senior college courses from retirement until last year. The Ottersons have been members of St. Stephen Lutheran Church for 48 years. When her children were young, Carlene helped with Sunday School Christmas programs and summer Vacation Bible School. She sang in the church choir for decades, participated regularly in a women’s Bible study and joined the quilters group for many years after her retirement. She provided once-a-week day care for grandson Paul when he was a newborn and toddler and enjoyed having any of the grandchildren, regardless of age, spending evenings or weekends in the home she helped design and in which she had lived for nearly 39 years. She also relished talking and laughing with her sisters, Diane and Judy. She is survived by her husband of 55-plus years, Don, of Marshall; son, Bob (Lisa) of Brookings, S.D.; daughter, Jill (Karl) Maurer of Chippewa Falls, Wis.; grandsons Matthew (Jess), Paul and Michael; granddaughters Maret, Ingrid and Katja; a great-grandson, Ben, whom she never met but enjoyed hearing about in her final days; two sisters, Diane (Dick) Isakson and Judy (Gary) Schafer, both of Gibbon; two nephews; four nieces; aunt Irene Luehring of Fairfax, Minn., and five first cousins. She was preceded in death by her parents, Ed and Irene, in August 1988, aunts, uncles and two first cousins.

The family of Carlene Louise Otterson created this Life Tributes page to make it easy to share your memories.

Send flowers to the Otterson family.