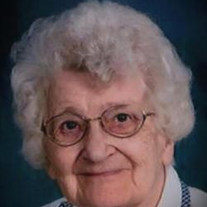 Marshall: Carleton Ione Dyce, age 95, of Minneota, MN, formerly of Watertown, SD, passed away at the Minneota Manor in Minneota, MN, on Thursday, May 15, 2014. Celebration of Carleton’s life will be 7:00 P.M. Friday, May 16th at Hamilton Funeral Home. Visitation will be 6:00 P.M. to 8:00 P.M. Friday. Second service will be 11:00 A.M. Monday, May 19th at the First United Methodist Church in Watertown. A private burial will be at the Garden City Cemetery in Garden City, SD. Carleton was born near Garden City on October 13, 1918, to Charles and Dora (Hansen) Barkley. She graduated from Garden City High School in l936. On June 25, 1945, she married her high school sweetheart William Wendell Dyce. They moved to Watertown in 1951, where she lived until moving to Boulder Estates in Marshall, MN, in 2000. From July 2006 until her death she resided at the Minneota Manor. Her move to Minnesota allowed her to be a nurturing part of her grandchildren’s lives. Carleton was preceded in death by her husband in 1974, her parents, a baby brother (Darrel) and her stepmother Fern (Wookey) Barkley. Survivors include her children: Darwin (Lori Fisher Dyce) of rural Ghent, Dennis (LaVonne Carlson) of Minneapolis, Doretta (David) Reisenweber of Duluth; grandchildren: Elizabeth Dyce of St. Paul, Emily (Adam) Hoffman of Vermillion, SD, and Evan Dyce of Moorhead; “grand” godchildren: Francesca Gibson of Minneapolis and Yolanda Hare of Chicago, and her sister Darlene Harrison of Sun City, Az.; as well as nieces nephews and cousins. Carleton was an active member of the First United Methodist Church, its Ada Fellowship, and WSCS and served as a Sunday School teacher for many years. She was happiest helping and working with people. After raising three children she was a highly valued clerk at several local drug stores in Watertown. Prior to marriage she especially enjoyed teaching at the Merton Township country school in 1944/45. She also worked as high school library aide. Carleton loved the outdoors and sharing the bounty of her garden and her kitchen. It was not uncommon for her to express gratitude and awe at the beauty of the day. The family home in Watertown served as a frequent gathering place for many friends and relatives. Blessed by the memory of Carleton I. Dyce The family requests memorials be made to a favorite charity, Prairie Home Hospice of Marshall, MN. or to the Minneota Manor.

The family of Carleton Ione Dyce created this Life Tributes page to make it easy to share your memories.

Send flowers to the Dyce family.